Reported Explosion/Fire in Nallamala - Remembering Tunguska Event Or Something Else ?

At this late night (its 11.53 p.m when im writing this post) responding to various news reports pertaining to news of explosion/plane crash etc...in nalamalla here is various points to note.

No Plane Crash : First of all its clear now from the reports of ATC Authorities in Hyderabad and Chennai that there is no plane missing or possibility of crash of plane or helicopter.

Based on our experience while having watch on various celestial/terrestrial events. I like to explore following events could be responsible for the explosion or fires in forest.

1. Was it because of Asteroid Explosion ?
I think this to be more appropriate based on what i have heard/seen on television channels. Importantly the version of Kurnool Collector Mr.Naik reported version over phone to TV5 supports my view of asteroid.

Further events in last two years starting with what happened in

or I may like to imagine for what happened in Tunguska.
(Click here for more details) to read our article written on occasion 100 years of tunguska event here is the image. 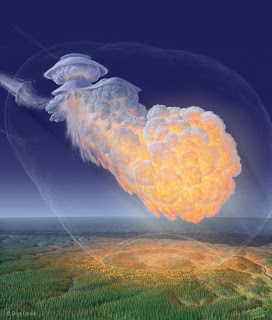 INDONESIA EVENT :
i come to this conclusion for tunguska event based what happened in 2009 october in Indonesia ?
Click here for more details

2. Was it Meteoroid or Perseid Meteor ?
As per television reports it seems people have seen a fireball (associated with Meteor Showers). Today is the last day of Persied Meteor Showers. 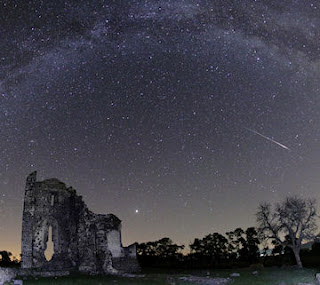 However if one sees the explanation given for reasons of what causes Meteor Shower or incoming debris. It will be clear that the particles rarely reach the ground but burn up in the sky.

3. Was it because of Lightning ?
By seeing the experiences in the western countries i guess lightning could be one of the reasons for this forest fire.


Lightning starts by a Thunder storm. Thunderstorms always come with a lot of wind. The wind starts to rub the surface of the ground and buildings. This action brings the electrons to the clouds. The ground becomes positively charged and the bottom of the cloud becomes negative and upper part becomes positive. Since clouds are better conductors than air, the clouds start to build up charges. This causes the lightning. Once lightning hits a tree, or another object, not just the ground, then the current moves through the tree and continues to spread horizontally.

A Single stroke of lightning can reach a temperature of 30,500oC, or five times hotter than the Sun's surface. If lightning strikes dry vegetation, this heat energy can start bushfires. To say this correct or not kindly visit the following link for detailed statistics.


Further here is the video which i compiled from web. It was found here. It shows how forest fire begun due to lightning.


4. Was it because of Explosion in Naxalite Dump ?
For me even this seems unlikely as the police or cofident that such a dump in that area couldnt have gone unnoticed by them. if at all such a dump of explosives were beleived to be there.

Further reports on television reporting eyewiteness account of something in the skies do support our earlier views of asteroid etc...Lets see in the morning what exactly is this.

Bit Regret:
Now its 12.42 a.m. tomorrow i will be busy because delegates from 10 districts are coming to attend "Cluster Level Training Programme" of 18th National Children's Science Congress. Venue: is Jeevan Jyothi Retreat House, Inside Lane Opposite Stopper's Stop Begumpet. I will be there for two days (25-26th August).

So may be bit of disappointment (or may not be so) for our media freinds like (for Sun Tsuanmi news on 4th August) i couldnt speak much though knew. At that time our society was organising three day workshop on Climate Change from 7th august to 9th August.Kindly visit www.tinyurl.com/apsa2010 Where we also organised "Andhra Pradesh Scientist Awards 2010" supplementing the efforts of Andhra Pradesh State Council of Science and Technology (APCOST) and NCSTC, DST, Govt of India.