What is a meteor?
A meteor is a shooting star (layman’s Language), space dust about the size of a grain of sand. The dust hits the earth’s atmosphere and burns up in a blaze of light. Where does space dust come from? Comets and asteroids pass through our solar system. These objects leave dust behind them. When earth crosses through these dust clouds we see a meteor shower

The source of the shower is asteroid 3200 Phaethon. There's a cloud of dust trailing the asteroid and Earth plows through it every year in mid-December. Bits of dust traveling 80,000 mph hit our atmosphere and turn into glowing meteors.

At this shower's peak observers may be able to see as many as 120 or more "shooting stars" per hour under dark skies (away from city lights).

Most meteors in a shower are quite small, about the size of a grain of sand. Geminids move at average speeds for meteors. They typically strike our atmosphere while traveling at speeds around 35 kilometers per second (about 78,000 mph). Geminids often leave yellowish colored trails as they zip through the atmosphere.

The Geminid meteor shower is one of several major meteor showers that occur on roughly the same date each year. The Geminids typically "peak" (are at their greatest level of activity) in mid December. The Geminid shower's name is derived from the fact that its meteors appear to fan out from a point in sky, called the shower's "radiant", which lies within the constellation Gemini.

In 2006, the Geminid shower is expected to peak on the night of Thursday, December 14th. The phase of the Moon will be a waning crescent around this time, so the Moon won't be very bright. That's good news if you're looking for meteors. A bright Moon makes it harder to see as many meteors.

Where to Look ? You Can Take the Help of Following maps. 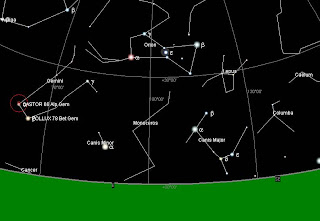 Using this image (represents sky at 9.00 p.m) first learn to Identify Orion (The Hunter) the consetellation with 3 Stars representing the hunter's Belt. Then look towards left to find Gemini Constellation.

This Image (represents sky at 11.15 p.m) can be used to witness the Meteor Shower which radiates from Constellation Gemini. 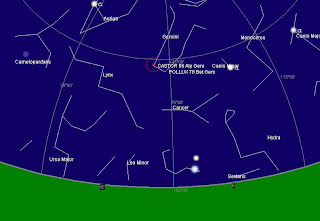