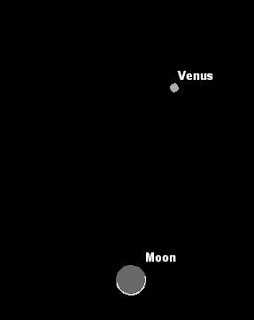 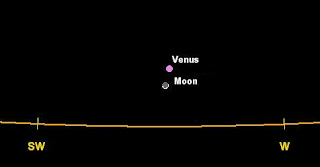 Brief about Venus:
Venus, named after the Roman goddess of love and beauty, is the second planet from sun in our solar system. .

Planet not a Star:
Even today this object is often misunderstood as a “Star” because of its “star like” appearance as seen through naked eye, whereas it is a planet.

Orbit of Venus being near to sun, it rises and sets with the Sun each day during its course of its revolution around sun. One would see it in evening (towards west) or morning (towards east) at different parts of the year as seen from earth. Unaware of this fact ancient civilizations believed it as two different objects.

General Public can spot Venus with naked eye in the evening sky. One has to look towards area between south west and west direction to find Venus after sunset. General public would see one star like object towards this direction, which is planet Venus.

Using Crescent Moon: On 20th January, 2007 Venus can be spotted above the crescent moon, one would see it like bright “star like object”.

This celestial spectacle though is of not much significance for astronomers however provides splendid view for general public and is an opportunity to spot a planet.