On 11th February, 2007 at 00.12 am IST Saturn is at opposition. A planet is at opposition when it is directly opposite the Sun from our viewpoint on Earth. At this point Sun-Earth- Saturn would be in a straight line and opposite to each other.

Saturn which will rise by 6.09 pm on 11th Feb, 07 will be as close as it can get to Earth in the Eastern Sky for next few days. Saturn now would be brighter and biggest for entire year allowing the people to witness it Rings. 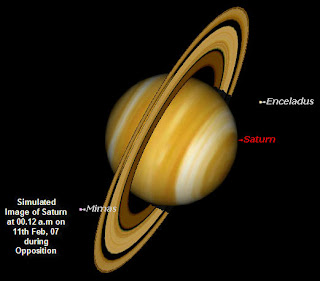 In Response my Interview on TV9 Newschannel (dt.10.02.07), Following Questions related to Saturn opposition which were enquired on Telephone at our office.

What’s Interesting?
1. At opposition to the Sun on the 11th, Saturn rules the night sky after Venus sets and before Jupiter rises. That means Saturn will be visible all night long from the time the Sun sets until the time the Sun rises. For example if one likes to see Jupiter on 11th Feb, 2007 he has to wait upto 2.17 a.m in the morning.
2. The most beautiful planet in the solar system, the one which we're visiting right now with the Cassini-Huygens spacecraft is this week at its closest point to Earth for the entire year. And thus looks bigger and brighter to both the naked eye and through a telescope than it will for all of 2007.

When and how to spot Saturn?
Although this week and next I suggest you start looking for it about one hour after sunset when it has risen high up enough off the eastern horizon and cleared all buildings and trees and obstructions.
Look towards the direction between east and north east direction. (Use the map). 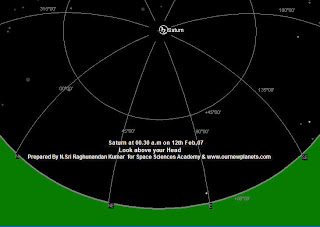 How to see rings of Saturn?
A small telescope is needed to appreciate the rings. Even a good pair of binoculars can reveal the rings, although often they simply make Saturn appear to be an oblong or football (American) shaped planet. Early astronomers sometimes described Saturn as having two small companions on either side, and in some cases as "handles" like those on a teacup.

Size:
Now although we say Saturn is the second largest planet in the solar system because it 's only 75,000 miles wide compared to Jupiter's 88,000 mile width, nevertheless if we count Saturn's rings Saturn is actually twice as wide as Jupiter from one edge of its ring system to the other.
And believe it or not its average density is less than that of water which means that if we could find a cosmic bathtub big enough Saturn would float. However because it is Saturn it would leave a ring around the tub.

So Look at Saturn now because you'll be able to see not only its big inner ring called ring b, but also its narrower outer ring, ring a separated by the space known as Cassini's division, named after the famous Italian astronomer for whom the Cassini to Saturn space craft is also named.