Geminid Meteor Shower: A meteor is a shooting star (layman’s Language), space dust about the size of a grain of sand. The dust hits the earth’s atmosphere and burns up in a blaze of light.
,
Where does space dust come from? Comets and asteroids pass through our solar system. These objects leave dust behind them. When earth crosses through these dust clouds we see a meteor shower.
In case of a meteors originating from comets When a comet flies close to the sun, intense heat vaporizes the comet’s "dirty ice" resulting in high-speed jets of comet dust that spew into interplanetary space. When a speck of this comet dust hits Earth's atmosphere traveling ~100,000 mph, it disintegrates in a bright flash of light—a meteor!

Specialty of Geminids Meteor Shower : The Geminids are not ordinary meteors. While most meteor showers come from comets, Geminids has a its origin from an asteroid—a near-Earth object named 3200 Phaethon.. Asteroids don't normally spew dust into space— How this asteroid produces the meteors is still mystery.

3200 Phaethon the parent body of Geminid Meteor showers is Potentially Hazardous Asteroid (PHA) : On 10th December,07 it flew past Earth at a distance of about 11 million miles away shining like a 14th magnitude star in the constellation Virgo: ephemeris.

Away from city lights from 7th December, 2007 to 17th December, 2007 people can witness this celestial spectacle from pollution free dark skies Three hours after sun set towards East. As per the report of International Meteor Organization (IMO) on 14th December, 2007 the Meteor shower will be at peak where more than 120 meteors per hour are expected to be seen from dark skies.

Where to Look : One has to look towards direction between North East and East Direction when the meteor shower is at peak on 14th Dec, 07 at 10.15 p.m. For Morning walkers can look towards sky above between west and North West direction from 4.00 a.m onwards before sunrise. One would see bright streaks of light zipping across the night sky 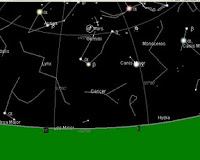