I write this article as i am on my way to attend "National Conference on Science Popularisation" at Indian Institute of Chemical Technology.

Society conducted "Astronomy Session" yesterday i.e. 12th March, 2008. The only thing i can tell you now is that we having being conducting "Teacher Astronomy Workshop" since last 4 years. Shortage of funds made us to shorten it to a session this time.

National Science Congress & National Workshop for Year of Planet Earth in January 2008, Science Express ( A Indo Gernman Project) in February made us delay this Session which is otherwise usually conducted in beginning of the year to create awareness among teachers about various celestial events in a year, Launch dates, News Reports, International Year Proclamed by UN etc... 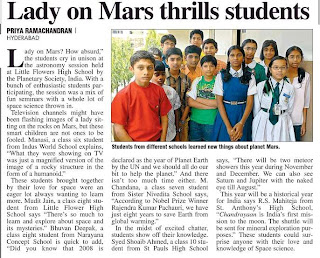 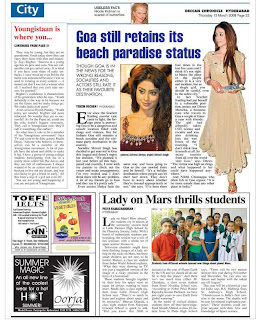 Another News Paper "SURYA" A Telugu Newsdaily wrote about the session particularly focusing on "Chandrayaan I" Indian Mission to Moon. 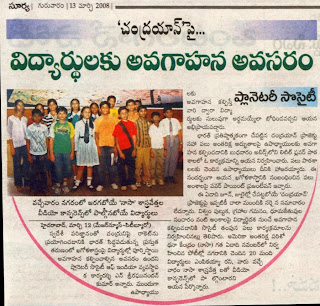 Freinds finally with recent resolution passed in the executive meeting of the society we for first time (after duly registering society 5 years ago and 10 years of working) are going to accept financial support or any support in Kind. For this from now on our Bank Account No. would also be put on the website.

Futher you may be aware membership to society was limited 1. "by nomination" only 2. Through subscription to the website. Now within a day or two we would with recent resolution would Open Membership to our Printed Newspaper (other categories would follow through) to General Public also.

You may ask what prevented us from not opening the memberships to general public ? After starting the society in 1998 and further while drafting (took 2 years of extensive study) the constitution the first signatories observed
1. Many people claimed need of investment, office, equipment to start good work
2. It was also observed many societies were floated and eventually went to people with "b... bowl"
3. You need lots of Professional knowledge to start society like "Planetary Society, India".

Hence it was resolved to restrict membership to nomination and also financial support.

Thus with achivements and projects we have done past years is an evidence and strong message to society in whole that if somebody likes to serve he can just begun with out much knowledge or money in hand. However what we have done is not something new.. World History particularly Indian history has bundles of such instances.

Why this Sudden Change ?

Now we understand we need to physically expand (society has loosely connected 11 state networks as of now) and serve larger section of society reaching every nook on corner of india and also help the nations in subcontinent particularly because "International Astronomical Year in 2009" society is making all efforts to strengthen itself.

Further when we begun our work way back people didnt like the concept itself at first. A society for observing stars, celestial bodies etc....However times now changed. There is greatest thirst to understand Cosmos now... Interpretation of Astronomical data by some people to promote their ideas spreading superstitions is antother aspect which worried us particularly because children are the people who are thrown into dilema...


More on Why we chose to talk using a Blog ? Why dont we have our own Web Hosting ? What was system of Nomination ?

Yes you guessed right ! This was also done to set a Message..

we will write all thing in FAQ's to be published on the site.