Following is the Artistic Impression of Dwarf Planet Haumea along with its moons: 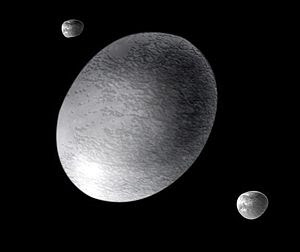 Waiting List : Further there nearly dozen more objects which may be considered by IAU after which the number of dwarf planets would increase.

Decision :
The decision was made after discussions by members of the International Astronomical Union’s Committee on Small Body Nomenclature (CSBN) and the IAU Working Group for Planetary System Nomenclature (WGPSN). This now means that the family of dwarf planets in the Solar System is up to five.

When was this object Discovered :
The discovery of Haumea was announced in mid-2005, and the object was initially given the provisional designation of 2003 EL61.

How Does Haumea look, i mean size and shape etc... !
It is a bizarre object with a shape resembling a plump cigar. Its diameter is approximately the same as that of the dwarf planet Pluto; however, its odd shape means that it is much thinner.
It is also known to be spinning very fast, making one rotation in about four hours. Some have suggested that this rapid rotation could be the reason Haumea came to look as it does – the dwarf planet has been drawn out and elongated by its swift spin.

What is the meaning of word "Haumea" ?
Haumea is the name of the goddess of childbirth and fertility in Hawaiian mythology. The name is particularly apt as the goddess Haumea also represents the element of stone and observations of Haumea hint that, unusually, the dwarf planet is almost entirely composed of rock with a crust of pure ice.

Hawaiian mythology says that the goddess Haumea’s children sprang from different parts of her body.

Are there any Satellites to this Dwarf Planet ?
The dwarf planet Haumea has a similar history, as it is joined in its orbit by two satellites that are thought to have been created by impacts with it in the past. During these impacts, parts of Haumea’s icy surface were blasted off. The debris from these impacts is then thought to have gone onto form the two moons.

What are the names of Moons of Haumea ?
After their discovery, in 2005, the moons were also given provisional designations, but have now too been given names by the CSBN and the WGPSN.
Hi’iaka : The first and largest moon is to be called Hi’iaka, after the Hawaiian goddess who is said to have been born from the mouth of Haumea and the patron goddess of the island of Hawai’i.
Namaka : The second moon of Haumea is named Namaka, a water spirit who is said to have been born from Haumea’s body.