When was this Comet Discovered ?

A new comet which has been discovered would be the brightest comet in the sky this month. Comet C/2009 F6 (Yi-SWAN) is a long-period comet which will pass within 1.27 AU of the Sun on May 8. The comet is currently around magnitude 8.5 making it bright enough to be seen in small telescopes. Right now the nearly Full Moon will make observing the comet difficult but in a few days the Moon will not be a problem for evening observers. The comet is located north of the Sun. For southern hemisphere observers, you are out of luck. For northern observers, the comet can be observed in both the evening and morning sky.

Here is the simulation showing the orbit of this Comet C/2009 F6 :

Who Discovered Comet C/2009 F6 ?
The comet was found by Dae-am Yi of Yeongwol-kun, Gangwon-do, South Korea on March 26. He noticed the obvious blue-green glow of a comet on 2 images he took with a Canon 5D digital camera and a 90-mm f/2.8 lens.

The other discoverer was Robert Matson of Irvine, CA. Mr. Matson found the comet on a series of images taken with the SWAN instrument on the SOHO (Solar Heliospheric Observatory) spacecraft starting on March 29. The SWAN insturment images the entire sky for solar Lyman-alpha particles that are backscattered off of neutral hydrogen atoms. In this way, SWAN can monitor the activity of the far-side of the Sun. This instrument is also excellent at detecting the glow of hydrogen in the extended coma of comets.

First Comet in Modern Age to named after Korean Citizen ?
According to a post on the MPML mailing list by Maik Meyer, this is the 1st comet discovered by and named for a Korean citizen in the modern age. There were first sightings of comet by Koreans in the 18th century before the comets were named for their discoverers.

Why then though Yi Discovered the asteroid (on 26th March) before SWAN Instrument by Robert Matson (on 4th Apr) doesn't get all the credit as lone discoverer ?
This asteroid though discovered photographically by Korean amateur astronomer, Dae-am Yi, on March 26th - word didn’t reach the Central Bureau for Astronomical Telegrams (CBAT) at the Smithsonian Astrophysical Observatory in Cambridge, Massachusetts until after it had been independently picked up on SWAN images by professional astronomer, Rob Matson, on April 4. However, once CBAT astronomers realized that both reports were for the same object, it officially took on the name Comet Yi-SWAN (C/2009 F6).

Presently Where can this Comet be Located ?
Currently the comet is located in Cassiopeia. It is moving to the east and will enter Perseus by mid-month. The comet should continue to brighten as it approaches perihelion and may be as bright as magnitude 8.0. 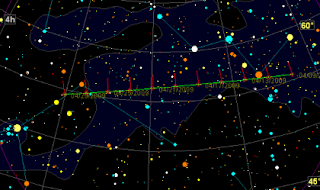 Direction to Look - In India and around – With Small Telescopes :

Enthusiasts with small telescopes in india can locate (in morning/evening) this comet in the constellation Cassiopeia (Evening or Morning). Cassiopeia sets in the direction between west and north west in the eveing. Whereas it rises in the morning between north and northeast direction by 5.a.m.

Presently moon lit skies, this object being close to horizon and morning/evening twilight makes catching this comet a hurdle to overcome, before one realizes his dream. By Mid of the month this comet will move into Perseus Constellation which sets after sun set and rises only after sunrise in the morning.

Sky as on 13 April,09 - Cassiopeia Constellation rising between East and North East 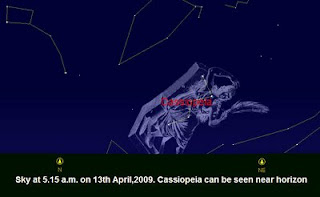