A total of 45 hopeful astronauts, including 15 women have made it into the second round of selection for China’s space program, Xinhua said on Thursday.

The candidates, with an average age of 30, will undergo a further round of physical and psychological tests to select a shortlist of five men and two women to take part in the next launch of a manned Chinese spacecraft, scheduled for 2011. All China’s astronauts have so far been male.

It is reported all of the 45 candidates, whose names have not been disclosed, are air force pilots with college degrees at the very least. 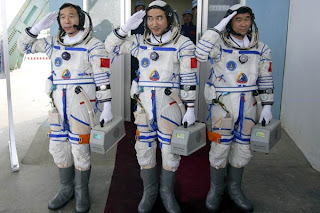 A Chinese astronaut conducted the country’s first spacewalk last September, making China the third country in the world after Russia and the United States to send a man into open space.

Own Orbital Space Station :
Further the source report's if one could see earlier Chinese media reports, the country will begin the construction of its own orbital space station in 2020.

The word yuhangyuan is Chinese for space navigator. It is the name used by official media when reporting on the nation's astronauts. The word taikonaut is derived from taikong, the Chinese word for space.

Indian Mission to Moon :
After successful launch of Chandrayaan I and major part of mission objectives achieved India has its own plan on its way to moon. It would be interesting to see when india would announce its candidate astronauts .... may be "INDONAUTS" Indian Astronauts.