What is Oceansat - 2 ?
Oceansat-2 is India's second satellite built for the study of the oceans as well as the interaction of oceans and the atmosphere to facilitate climatic studies. 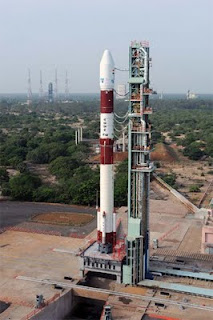 What is the prime goal of Oceansat - 1 ?
With the goal of providing continuity of services available from Oceansat-1 (IRS-P4) as well as to facilitate new applications, the 960 kg Occansat-2 is launched into a polar Sun Synchronous Orbit (SSO) of 720 km height.

How will Oceansat -2 will be launched ?
For this India's workhorse launch vehicle PSLV is used as part of its sixteenth mission. In this mission, designated as PSLV-CI4, six nano satellites are also carried by PSLV along w.th Oceans.u-2 as auxiliary payloads to orbit.

What is the name of three main paylaods of Oceansat - 2 ? Which is the body which will recive the data from this satellited in India ?
Data sent by the three payloads of Oceansat-2 - Ocean Colour Monitor (OCM). Ku-band Pencil Beam Scatterometer and Radio Occupation Sounder for Atmospheric Studies (ROSA) - would be received at National Remote Sensing Centre (NRSC) of ISRO. ROSA is built by Italian Space Agency.

Why should one send a satellite to study oceans ? Is it necessary ?
Oceans cover about 70% of the Earth's surface. Considering the importance of oceans as a source of food for humans as well as their important role in shaping the Earth's weather and climate, and their influence on global energy balance and biological life cycle, study of oceans becomes very important In this context. Ocean-mission acquires added significant*

Here is the information about various aspects of OCEANSAT -2

About : Oceansat-2: The Satellite

Occansat-2 is the sixteenth remote sensing satellite of India. The state-of-the-art Oceansat-2 weighs 960 kg at lift-off and has the shape of a cuboid with two solar panels projecting from its sides.

The satellite's CFRP structure facilitates mounting of payloads while its thermal subsystem consisting of many passive materials and active gadgets helps maintain the spacecraft's temperature within safe limits.

Deployment and Energy : The Oceansat-2's mechanisms subsystem takes care of the deployment of its two solar panels as well as the release of OCM and Scatterometer from their 'hold down position'. It also facilitates the tilting of OCM payload to avoid sun glint.

Communication – Data Reception : The Telemetry, Tracking and Command subsystem of Oceansat-2 works in S-bnnd and its payload data is relayed through X-band The satellite has a 64 GB solid state recorder to store the imagery for later read out.

Directional Reference : A host of Earth and Sun Sensors as well as gyroscopes provide the directional reference for its processor based Attitude and Orbit Control System to properly orient the spacecraft and provide sufficient stability during various phases of the mission, especially during imaging.

Four Reaction Wheels and mono propellant Hydrazine thrusters are used as actuators to control its orientation. Thusters are also used for the satellite's orbit control.

Scatterometer : The Ku-band Scatterometer with a Im diameter antenna rotating at 20 rpm and generating two beams, works at a frequency of 13.515 Ghz. The Scatterometer covers a swath of 1400 km and operates continuously.

ROSA : ROSA is a GPS Receiver for atmospheric sounding by radio occupation. It determines position, velocity and time using GPS signals. Besides providing real-time navigation data with conventional accuracy, ROSA receives RF signals from the Vising' GPS satellites near Earth's horizon through its occultation antenna and from the excess phase delay and Doppler measurements made by this payload. vertical profiles of atmospheric parameters (density, refractivity. temperature, humidity and pressure) will be derived up to an altitude of about 30 km.

ISRO's workhorse launch vehicle PSLV is chosen to launch Oceansat-2 during its PSLV-C14 mission, which is us sixteenth.

In this l6 year period PSLV has repeatedly proved its reliability and versatility by launching satellites to polar Sun Synhcronous, Gesoynchronous Transfer, Low Earth and Highly Elliptical orbits. Of the 32 satellites launched by PSLV so far 16 have been Indian and the rest being satellite from abroad.

Multiple Launch : During many of its missions. PSLV has launched multiple satellites into orbit with the maximum number bong 10 dunng PSLV-C9 mission in April 2006.

The weight of these nano satellites is in 2-8 kg range Oceansat-2 and the six auxiliary payloads are scheduled to be earned into a polar Sun Synchronous Orbit of 720 km height inclined at an angle of 98.28 deg to the equator.

How are the satellites deployed ?
The auxiliary payloads of PSLV-C 14 are educational satellites from European Universities and are intended to test new technologies. After the separation of Oceansat-2 from PSLV-C 14. the four cubesats will be separated, while Rubin 9.1 and 9.2 remain permanently attached to the upper stage.

PSLV was originally designed to place 1000 Kg class of India's remote sensing satellites into a 900 km polar Sun Synchronous Orbit (SSO). The payload capability of PSLV has been successively enhanced and in its ninth flight. PSLV-C6. in May 2005. the vehicle launched two payloads - 1.560 kg CARTOSAT-I and 42 kg HAMSAT into a 620 km SSO. And. In its thirteenth flight. PSLV-C9. the vehicle launched ten payloads 680 kg CARTOSAT-2A. 83 kg Indian Min Satellite (IMS-1) and eight nano satellites from abroad. Later, the uprated version of the vehicle.

PSLV-CII. launched India's first spacecraft to moon. Chandrayaan-1.
into a highly elliptical orbit around the earth. The improvement in die capability of PSLV over successive flights has been achieved through several means. They include increased propellant loading in the stage motors and the strap-ons, employing composite material for the satellite mounting structure and changing the sequence of firing of die strap-on motors. The 3.2 metre diameter metallic bulbous payload fairing of PSLV-CI4 protects the satellites during the atmospheric flight and it is discarded after the vehicle has cleared the dense atmosphere. PSLV employs a large number of auxiliary systems for stage separation, paytoad fairing separation and so on. It has sophisticated systems to control the vehicle and guide it through the predetermined traiectory

It has demonstrated multiple satellite launch capability having launched sixteen satellites for international customers besides sixteen Indian payloads of which eleven were remote sensing satellites, others being a satellite for amateur radio communications, a recovery capsule (SRE-1). a meteorological (weather watching) satellite, one mooncraft and a university satellite Though originally designed for launching payloads into polar Sun Synchronous Orbits.

PSLV was used in September 2002 to launch ISRO's exclusive meteorological satellite. KALPAN A-1. into a Geosynchronous Transfer Orbit (GTO> and thus proved its versatility And in April 2007. the vehicle launched the Italian astronomical satellite AGILE into a Low Earth Orbit of 550 km height. More recently the vehicle was also successfully used to launch a spacecraft for India's first mission to Moon. Chandrayaan-1, in 2008

Studies to examine the feasibility of using remote sensing data for various tasks began in the country as early as 1972 itself. Following this, analysis of imagery from Bhaskara as well as those from Landsat and SPOT satellites enabled Indian applications scientists to learn the technique of systematically interpreting them. Remote sensing satellite utilisation plan got a further fillip with the launch of IRS-IAm 1986, and during the 1990s. IRS data utilisation became institutionalised.

How exactly it helps ?
The accurate classification of wastelands, which has been done based on IRS data, leads to their reclamation and eventual utilisation for agricultural purposes. Similarly, forest cover assessment and forest fire detection are useful in managing our precious forest wealth and the associated biodiversity.

This Apart pollution monitoring can help us prevent or mitigate environmental degradation. And. use of remote sensing satellite imagery can lead to orderly development of urban areas. The launch of Indian remote sensing satellites of increased sophistication with better spatial, spectral, temporal and radiometric resolution will enable more intense and detailed survey of India's natural resources, which is necessary for their efficient management.

Today, remote sensing satellites of India provide data in the resolution range of 360 m to better than Im. Together, they provide multrspectral, hyperspectral. panchromatic as well as stereoscopic imagery. As of July 2009. India had a constellation of nine remote sensing satellites circling the Earth, mostly in polar Sun Synchronous Orbits of 550-820 km height. Imagery from some of them ts being marketed worldwide.

International Use and recognition :
Specifically, data from IRS-P4 (Oceansat-I) is being used for various applications both within India as well as by international users The most significant application areas of IRS-P4 data are advisories of Potential Fishing Zones (PFZ). Coastal water pollution and sedimentation monitoring, estimation of water vapour content in the atmosphere and the prediction of the onset of Monsoon. The advisories of PFZ helped in increasing catch per unit effort. The advisories contain information about distance, direction and depth of potential fishing zones.

How can Scatterometer be utilised ?

Similarly, data from Scatterometer can be utilised for important activities like numerical weather prediction / forecasting, ocean state forecasting. identification of cyclone and hurricane formation and monitonng their progress.

Besides. PFZ identification can be improved by the assimilation of wind information provided by scatterometer with Chlorophyll concentration data from OCM as well as Sea Surface Temperature data This apart, Scatterometer data facilitates monitoring of changes in polar Sea Ice. And. it serves as a data source for developing algorithms for the retrieval of geophysical parameters like wind vector and ocean colour from observed dau. By blending of this data with data collected from other sources, ocean and atmospheric models can be developed In 2008.

International Interest in Indian Space Programme :
ISRO released an Announcement of Opportunity (AO) for utilisation of both OCM and Scatterometer data for global scientific community, in response to which 28 proposals were received from International users. In addition. Oceansat-2 Utilisation Programme for Indian users has also been launched.