After long time for now its a wake up call from Space.As you are aware compared to last year there have been great number of asteroids i.e. space rocks entering atmosphere. This time however the scenario is different as it happened in india asking us to think and be prepared for the future.

What happened ?
On October 8, 2009 about 03:00 Greenwich time, an atmospheric fireball blast was observed and recorded over an island region of Indonesia. The blast is thought to be due to the atmospheric entry of a small asteroid about 10 meters in diameter that, due to atmospheric pressure, detonated in the atmosphere with an energy of about 50 kilotons (the equivalent of 110 million pounds of TNT explosives).
The blast was recorded visually and reported upon by local media representatives

Is it media hype story or happened in reality ?
A report from Elizabeth Silber and Peter Brown at the University of Western Ontario indicates that several international very-long wavelength infrasound detectors recorded the blast and fixed the position near the coastal city of Bone in South Sulawesi, island of Sulewesi. They note that the blast was in the 10 to 50 kT range with the higher end of this range being more likely.

Explosion detected by Many stations across the world :

In other words, the explosion was detected by many International Monitoring System (IMS) infrasound stations, five of them 10,000 km (6200 miles) away, and one 18,000 km (11,100 miles) from the blast. These stations monitor seismic waves, infrasound (low frequency soundwaves), hydroacoustic, and radionuclide emissions as part of the Comprehensive Nuclear-Test-Ban Treaty Organization (CTBTO). They are well equipped to monitor explosions of nuclear weapons, but also detect other events such as meteorite impacts and asteroid explosions, tsunamis and earthquakes 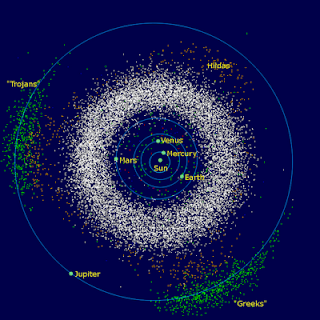 Where are these asteroids located or from where they come ?
Here is the slide show which show location of asteroids,their number orbits etc..


How frequent such asteroids come to us ?
we would expect a fireball event of this magnitude about once every 2 to 12 years on average.

A more extensive report by Elizabeth Silber and Peter Brown of the University of Western Ontario is here.

Here is the list of earlier such blast - as we recorded in our blog :

Fireball in the Skies of Canada