NASA MISSION TO IMPACT MOON - WILL NOT BOMB IT

On 9th October, 2009 as part of NASA'S Historic Mission to Moon “Lunar Crater Observation and Sensing Satellite ("LCROSS") and its Centaur booster rocket would have double-impact on surface of Moon. This impact on crater's floor is designed to "unearth" signs of lunar water. According to NASA the satellite and upper stage both are scheduled to hit a permanently shadowed crater of the moon called Cabeus, four minutes apart approximate time of impact would be 4:30 a.m PDT i.e. 5 P.M. Indian Standard Time on 9th October,2009.

Significance : This impact event grabs all significance as it comes after Historic announcement of NASA that the Moon Mineralogy Mapper, or M3, an instrument aboard the Indian Space Research Organization's Chandrayaan-1 spacecraft, discovered water molecules in the polar regions of the Moon. As you know the announcement was confirmed with support of Data from NASA's Cassini spacecraft and NASA's Epoxi (originally Deep Impact Mission) spacecraft. 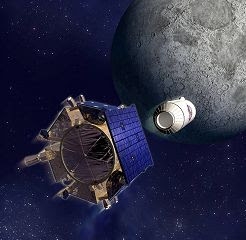 Society has prepared school kit, media kit regarding this impact as part of World Space Week celebrations in order promote awareness about lunar exploration and in true spirit of International Year of Astronomy 2009.

Here is the Video compiled by society sourced from NASA:


So What is LCROSS OR LRO ? When were they launched ?
Lunar Reconnaissance Orbiter (LRO) and Lunar Crater Observation and Sensing Satellite (LCROSS) are the first missions launched as part of the United State’s Vision for Space Exploration program. Launched on 18 June 2009, in conjunction with the LCROSS, as the vanguard of NASA's Lunar Precursor Robotic Program, this is the first United States mission to the Moon in over ten years.

The Lunar Reconnaissance Orbiter (LRO) is a NASA robotic spacecraft currently (as of October 2009) orbiting the Moon on a low 50 km polar mapping orbit. The LRO mission is a precursor to future manned missions to the moon by NASA. To this end a detailed mapping program will identify safe landing sites, locate potential resources on the moon, characterize the radiation environment, and demonstrate new technology.

So what will exactly happen on 9th October, 2009 ? Is it true that NASA is bombing Moon ? Will this impact put our Moon into danger ? Will moon be broken into two halves ?
According to NASA the LCROSS satellite and upper stage both are scheduled to hit a permanently shadowed crater of the moon called Cabeus, four minutes apart.

No, nothing will happen to moon. Moon is not put to any sort of danger.

What is the sequence of events ?
First of all the Centaur rocket will strike first, transforming 2200 kg of mass and 10 billion joules of kinetic energy into a blinding flash of heat and light.

Researchers expect the impact to throw up a plume of debris as high as 10 km.
Close behind, the LCROSS mothership will photograph the collision and
then fly right through the debris plume. On board spectrometers will analyze the sunlit plume for signs of water (H2O), water fragments (OH), salts, clays, hydrated minerals and assorted organic molecules.

Next comes the mothership's own plunge. Four minutes after the Centaur "lands," the
700 kg LCROSS satellite will strike nearby, sending another, smaller debris plume over the rim of Cabeus.

The Hubble Space Telescope, the Lunar Reconnaissance Orbiter (LRO), and hundreds of
telescopes great and small on Earth will scrutinize the two plumes, looking for signs of water and the unexpected. 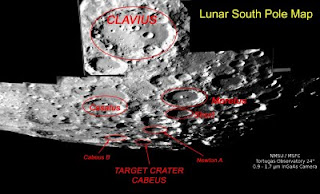 Why was this Crater Chosen ? Crater Cabeus was chosen for impact because it has greatest level of certainty, it is known to have highest hydrogen concentrations at the south pole.

Can this impact be seen from India ? From where exactly this is visible? No the material thrown out from moon after the impact cannot be seen from India. Because at 5pm is no where in the sky. It is slated to rise some time late in night.

The Pacific Ocean and western parts of North America are favored with darkness and a
good view of the Moon at the time of impact. Hawaii is the best place to be, with Pacific coast states of the USA a close second. Any place west of the Mississippi River, however, is a potential observing site.

What will people see from earth ?
After impact of the LCROSS plumes would emerge from Cabeus, they will be illuminated by sunshine streaming over the polar terrain. The crater itself will be in the dark, however, permanently shadowed by its own walls. "That's good.Crater's shadows will provide a dark backdrop for viewing the sunlit plumes." says a NASA Scientist.

When was in recent past such kind of Impact taken place on Moon ?
India’s Moon Impact Probe On 14th Nov,2008 : Earlier as part of India’s First Mission to Moon “Chandrayaan I”. Indian flag embedded on “Moon Impact Probe” successfully impacted the surface of moon on 14th November,2008.

According to ISRO Chairman even before M3 instrument of NASA. India’s MIP Impact gave one of the first signatures for presence of water on moon.

Further not to forget Kaguya the Japanese Mission to Moon also crash landed this year. Click here our article in june, 2009 for details of this.

Im a Student how can i know more about this mission ? What can i do ? Kids if you are studying in school we have lot more to give this time. You may ask any incharge to write us at planetarysocietyindia@yahoo.com with request along with proper identification, full details of school,name of the principal,phone etc.. Importantly
1. one scanned letter from Principal that the kit would be used for a session in the school
2. After the programme Report containing images of the session conducted can be sent to us.

if you can do this next time there will not be any hassles. Things will directly be delivered to your school freely/nominal cost.


OK IF YOUR NOT SATISFIED WITH THAT THERE IS NO HARM TO MOON JUST SEE THE NEXT ARTICLE.