Year 2009 proclaimed at “International Year of Astronomy” ends with a Partial Lunar Eclipse on 31 December in late evenings which welcomes New Year on 1st Jan, 2010.

The maximum covering of moon would takes place at 00.53 am on 1st Jan 2010 when nearly 8 percent of moon’s disk is covered by dark shadow (umbra) of earth.

Visibility:
1. Counties who would see beginning/end of Umbral phases: Apart from India this eclipse will be visible in many countries in the region covering Alaska, Australia, Indonesia, Asia, Africa, Europe including the British Isles and the Arctic regions.
2. Counties who would see Starting or Ending Umbral Phase: The beginning of the umbral phase will be visible from the extreme south-eastern part of Australia, middle of South and North Pacific Ocean and extreme Solomon Island. The ending of the umbral phase will be visible from North and South Atlantic Ocean and Greenland.

In India the beginning, the middle and the ending of the eclipse will be visible from all parts of India.

Watch with Naked Eye – Where to See – What can be expected: No Filters are required to watch this spectacle. One can spot the moon in the east direction at 10.45 p.m. whereas at 00.22 if one looks above his head near to zenith one can notice small part of moons disk is slowly darkening and clearing off by 1.24 a.m. 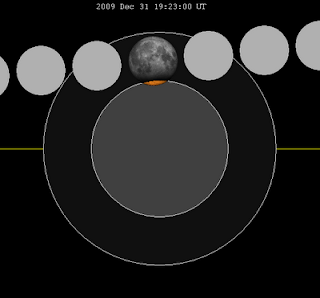 In true spirit of United Nations proclamation of 2009 as “Year of Astronomy” Society requests people to observe this celestial spectacle and promote scientific temper inspiring future astronauts, scientists of the country as this year Chandrayaan I found signature of water on moon.

In this video various phases can be easily understood.