99942 Apophis (pronounced /əˈpɒfɪs/, previously known by its provisional designation 2004 MN4) is a near-Earth asteroid that caused a brief period of concern in December 2004 because initial observations indicated a small probability (up to 2.7%) that it would strike the Earth in 2029.

Apophis expected to pass close-by the Earth in 2029 and again in 2036. It is the 2036 passage that is causing some concern, as there is a small risk of impact. The 2029 passage has been calculated to be as close as 30,000 km of the Earth's surface – closer even than the geosynchronous satellite orbit height of 36,000 km.

In Anatoly Perminov own words source : HRF/MTM/MMN):
"We will soon hold a closed meeting of our collegium, the science-technical council to look at what can be done,"

"People's lives are at stake. We should pay several hundred million dollars and build a system that would allow us to prevent a collision, rather than sit and wait for it to happen and kill hundreds of thousands of people,"

"Calculations show that it's possible to create a special-purpose spacecraft within the time we have, which would help avoid the collision. The threat of collision can be averted,"

According to Perminov, the Russian space agency would invite the European Space Agency, NASA and others to participate in the project.


How much energy this object can release if on collision course ?
NASA initially estimated the energy that Apophis would have released if it struck Earth as the equivalent of 1,480 megatons of TNT. A later, more refined NASA estimate was 880 megatons.The impacts which created the Barringer Crater or the Tunguska event are estimated to be in the 3–10 megaton range The 1883 eruption of Krakatoa was the equivalent of roughly 200 megatons.
Path of risk where 99942 Apophis may impact Earth in 2036. 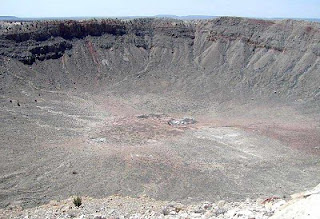 View of Lonar Sarovar, from the view point near the MSTDC resort.
This is a merge of two photos, and the patchwork is visible in the middle.

What would happen if it really impacts us ?
The exact effects of any impact would vary based on the asteroid's composition, and the location and angle of impact. Any impact would be extremely detrimental to an area of thousands of square kilometers, but would be unlikely to have long-lasting global effects, such as the initiation of an impact winter.

some scientists believe that the Apophis asteroid, approximately the size of two-and-a-half football fields, could create a desert the size of France, should it strike the Earth.

B612 Foundation - Deflection Srategies - Areas which may be effected:
The B612 Foundation made estimates of Apophis' path if a 2036 Earth impact were to occur as part of an effort to develop viable deflection strategies. The result is a narrow corridor a few miles wide, called the path of risk, and it includes most of southern Russia, across the north Pacific (relatively close to the coastlines of California and Mexico), then right between Nicaragua and Costa Rica, crossing northern Colombia and Venezuela, ending in the Atlantic, just before reaching Africa.Using the computer simulation tool NEOSim, it was estimated that the hypothetical impact of Apophis in countries such as Colombia and Venezuela, which are in the path of risk, would have had more than 10 million casualties.An impact several thousand miles off the West Coast of the US would produce a devastating tsunami.

Here is the list of earlier such blast/closest approach/impact/recovery - as we recorded in our blog :

0ctober 2009:
Asteroids Calling you for Action - Explosion in Indonesia a Reminder - Number of Space Rocks this year

November 2008:
Fireball in the Skies of Canada

What are the various solutions ?

The B612 Foundation has published numerous research papers which attempt to define and plan the kind of mission required. They also have a description of the most likely techniques that could be applied to an asteroid such as Apophis.
These include:
* blowing it up (which will probably cause a much larger number of smaller objects to approach us)
* kinaesthetic impact (shooting something big and heavy at it to cause an orbital deflection)
* slow push (resting the nose of a craft against the asteroid and pretending to be a trug-boat)
More obscure methods include painting one side of the asteroid white to modify it's interaction with the sun's rays.

Former US astronaut Rusty Schweickart says "Perminov is right that the capability to deflect an impact threatening asteroid needs to be developed and demonstrated, and that that work needs to be done cooperatively with other space agencies, and he (russian space agency head) should be loudly applauded for that." However Schweickart also warns (at the same link) that the intended target remains a relatively low chance of impact (1:233,000) and it is probably too early to consider such a mission.


“I do think governments should take this seriously. I also know that as of right now, NASA is not taking this seriously enough. Perhaps if Russia gets this ball rolling, and other countries (like India, China, and Japan) join in, then NASA will be forced to take a better look at this situation. I know I was being a little snarky above (this is a blog, after all), but in the end some good may come of this. We just don’t know enough about asteroids and how to push them out of the way. We need to set up and fly missions to a few near-Earth asteroids to understand them better and add to our knowledge of their composition, structure, and behavior.”