On 22nd March, 2010 Saturn was at opposition. Because of this phenomena Saturn will be as brightest, biggest and closest it can get to Earth in this entire Year. Because of opposition one can notice that as sun sets in west Saturn rises in the east and visible all through the night (as it climbs highest in the sky at midnight) whereas by the time it is morning Saturn would set in the western sky when sun is rising in the east.

Moon Conjunction with Saturn on 29th Mar 10 (Spot Saturn with Naked Eye Using Moon On 29th Mar 10) : On 29th March Moon is in conjunction with Planet Saturn ie. Saturn can be spotted just 7.937 degrees north of Moon. i.e. both moon and Saturn appear to be near to each other as seen from earth.

Where to see /time: At 7.30 p.m. if one looks at East Direction one would see Bright moon and a Non twinkling star like object just above left side. Which is nothing but planet Saturn. At 12 Midnight one can find Saturn above ones head near to zenith and at 5.00 a.m. it can be found on the right side of moon in western direction. Saturn would appear as star like object for naked eye. Telescopes are not needed to spot planets however to appreciate its finest features along with magnificent rings one would need it. How to identify other planets in sky and how to differentiate a star from planet look brief notes.

CLICK ON THE IMAGES TO SEE ENLARGED VIEW
29th March :
Sky as seen at 7.30pm 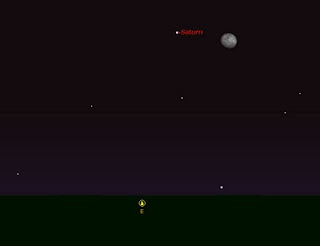 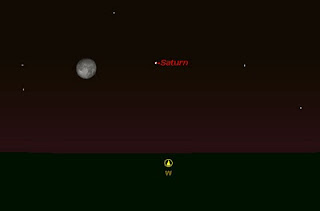 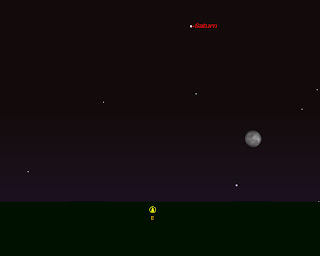 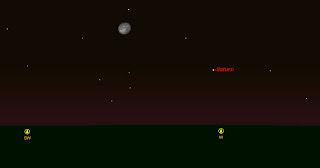 Observation Astronomical Telescopes: Further society is happy to announce SATURN OBSERVATION CAMPAIGN INDIA 10 (21st March to 2nd Sept) and likes to conduct Observations at various places in the state with the help of its Astronomical telescopes. Society invites interested schools and other organizations to write with request to planetarysocietyindia@gmail.com.