Huge Firball in United States - Should we Worry ?

On 14 April, 2010 a huge fireboall was seen over at least seven midwestern US states including Wisconsin, Michigan, Iowa, Minnesota and Illinois 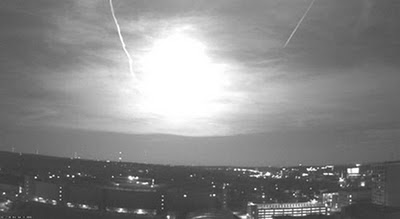 A fireball over Wisconsin. Image credit:
University of Wisconsin - AOS/SSEC › Larger view
Here is the Compilation of Videos and pic for this Event on 14th April:

What is fireball ?
A fireball is a meteor, or "shooting star," that emits a brilliant light as it enters Earth's atmosphere.

A rooftop webcam at the University of Wisconsin-Madison captured the final seconds of a fireball's Wednesday, April 14 descent into the atmosphere.

Emergency Number Calls - Eyewitness Accounts :
News reports in the area indicated that 911 call
centers in at least six states began to light up with calls reporting the celestial visitor a little after 10 p.m. local time. Eyewitness accounts stated it was moving from west to east and broke into multiple pieces. Numerous witnesses also heard crackling sounds and a sonic boom. It is not know yet if any debris from the fireball survived the intense heat of atmospheric entry and made it to Earth's surface.

Statement of  Don Yeomans of NASA's Near-Earth Object Office at the Jet Propulsion Laboratory in Pasadena, Calif. : According to said Don Yeomans  "The frequency of space debris entering our atmosphere that is large enough to generate a fireball is something on the order of once or twice a day. What is somewhat unique about this one is that it was witnessed by so many and captured on tape. Knowing the size of this small asteroid helps us determine the frequency of such occurrences. Asteroids this size are expected to enter Earth's atmosphere about once a month."

Size of the body 3.3. Feet : Data collected by scientists at NASA's Marshall's Space Flight Center, Huntsville, Ala., indicate the parent body of the fireball was approximately 1 meter (3.3 feet) in length and was not associated with the Gamma Virginids meteor shower, which was taking place at the time the fireball entered the atmosphere.

From Asteroid Belt - 20 Tons TNT :
Instead, the small space rock more than likely originated from somewhere in the asteroid belt.
When the fireball disintegrated high in the atmosphere, it released energy equivalent to the detonation of approximately 20 tons of TNT.


NASA detects, tracks and characterizes asteroids and comets passing close to Earth using both ground- and space-based telescopes. The Near-Earth Object Observations Program, commonly called "Spaceguard," discovers these objects, characterizes a subset of them, and plots their orbits to determine if any could be potentially hazardous to our planet.

What Exactly Happened to the Fireball ?
During a meteorite fall, much of the original rock, called a meteoroid, vaporizes in the atmosphere due to frictional heating as it plunges earthward between seven and 45 miles per second. Think of the weight loss as a cosmic version of The Biggest Loser. Stresses brought on by air pressures at those speeds can break the remaining object(s) into small pieces which then fall to the ground across an oval-shaped stretch of land called a strewn field. The smallest pieces drop first and are found at one end of the oval while the big ones drop last and are at the other end. To give you an idea of what a strewnfield looks like, I've included a map made by Svend Buhl of the Pultusk meteorite fall in Poland in 1868. 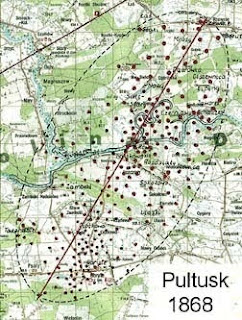 The size and exact shape of the oval depend upon many factors: the object's speed, angle of entry, how fragile the material is and the local wind speeds at the time of the fall. Wonderful to think we just received a visitor from the asteroid belt that's been out in space since the dawn of the solar system minding it's own business for four and half billion years. Scientists are eager to examine the meteorite to determine its composition, whether it broke off from a larger object and if so, how long it's been out there since. 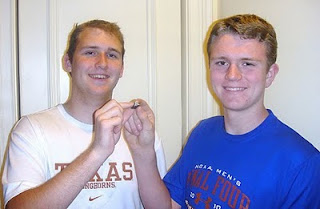 Christopher and Evan Boudreaux hold the first recovered meteorite from the April 14, 2010 Wisconsin fireball.
The first stone was recovered 22 hours after the fall. Credit: Terry Boudreax, shared by Michael Johnson from Rocks From Space
According to Astro Bob the pieces of meteorite from Wednesday night's amazing fireball appear to have fallen over the Livingston, Wisconson area between Platteville and Avoca. So people in these areas were asked to trace if they can.

A Dog finds  Meteorite   ?
The number of meteorites found in last week's fall over southern Wisconsin continues to rise but one find in particular stands out as exceptional. Brix, a dog owned by Nevada-based meteorite hunter Sonny Clary, found his first meteorite earlier this week. 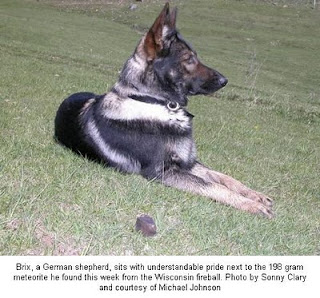 How does a dog find a meteorite?
Training of course. Brix is the first trained meteorite hunting dog in the world. Clary worked with Brix in the deserts of Nevada familiarizing him with the "scent" of meteorites and his hard work finally paid off.