TORNADOES IN INDIA - Learning through US Experience

What Are Tornadoes?
A tornado is a violent, dangerous, rotating column of air which is in contact with both the surface of the earth and a cumulonimbus cloud or, in rare cases, the base of a cumulus cloud. The most intense of all atmospheric phenomena, tornadoes come in many shapes and sizes but are typically in the form of a visible condensation funnel, whose narrow end touches the earth and is often encircled by a cloud of debris and dust. Most tornadoes have wind speeds between 40 mph (64 km/h) and 110 mph (177 km/h), are approximately 250 feet (75 m) across, and travel a few miles (several kilometers) before dissipating. The most extreme can attain wind speeds of more than 300 mph (480 km/h), stretch more than a mile (1.6 km) across, and stay on the ground for dozens of miles (more than 100 km) 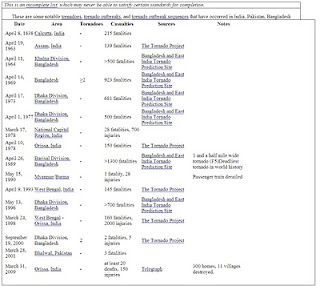 In Simple words : Tornadoes  are nature’s most violent storms. Tornadoes must always be taken seriously. Tornadoes can be very dangerous -- sometimes even deadly. They come from powerful thunderstorms and appear as rotating, funnel-shaped clouds. Tornado winds can reach 300 miles per hour. They cause damage when they touch down on the ground. They can damage an area one mile wide and 50 miles long. Every state is at some risk, but states in "Tornado Alley" have the highest risk. Tornadoes can form any time of the year, but the season runs from March to August. The ability to predict tornadoes is limited. Usually a community will have at least a few minutes warning. The most important thing to do is TAKE SHELTER when a tornado is nearby.

What could be the size of Tornado ?
Most tornadoes take on the appearance of a narrow funnel, a few hundred yards (meters) across, with a small cloud of debris near the ground. Tornadoes may be obscured completely by rain or dust. These tornadoes are especially dangerous, as even experienced meteorologists might not spot them. Tornadoes can appear in many shapes and sizes.

Some Media Coverage and others  Links in India :
1. Click here to See a article covered by Telegraph.

How do they Appear ?

Tornadoes can have a wide range of colors, depending on the environment in which they form. Those which form in a dry environment can be nearly invisible, marked only by swirling debris at the base of the funnel. Condensation funnels which pick up little or no debris can be gray to white. While traveling over a body of water as a waterspout, they can turn very white or even blue. Funnels which move slowly, ingesting a lot of debris and dirt, are usually darker, taking on the color of debris. Tornadoes in the Great Plains can turn red because of the reddish tint of the soil, and tornadoes in mountainous areas can travel over snow-covered ground, turning white.

Photographs of the Waurika, Oklahoma tornado of May 30, 1976, taken at nearly the same time by two photographers. In the top picture, the tornado is lit with the sunlight focused from behind the camera, thus the funnel appears bluish.

In the lower image, where the camera is facing the opposite direction, the sun is behind the tornado, giving it a dark appearance.

Lighting conditions are a major factor in the appearance of a tornado. A tornado which is "back-lit" (viewed with the sun behind it) appears very dark. The same tornado, viewed with the sun at the observer's back, may appear gray or brilliant white. Tornadoes which occur near the time of sunset can be many different colors, appearing in hues of yellow, orange, and pink.

Dust kicked up by the winds of the parent thunderstorm, heavy rain and hail, and the darkness of night are all factors which can reduce the visibility of tornadoes. Tornadoes occurring in these conditions are especially dangerous, since only weather radar observations, or possibly the sound of an approaching tornado, serve as any warning to those in the storm's path.

What Causes Tornadoes? Conditions in USA ?
Why tornadoes occur is still largely unknown but in many cases 3 conditions must be satisfied for a thunderstorm to become tornadic in the US.
1. Firstly, there must be a warm, humid air stream from the Gulf of Mexico. 2. Secondly, there must be a cold, dry air stream coming in from the north (Canada) or eastwards from the Rocky Mountains which meet along the dry line.
3. Thirdly, the jet stream must be coming from the north-west at a speed of approximately 150 mph. When all of these 3 conditions are met it can start a spin in a thundercloud (Kovach and McGuire, 2003).

Tornadoes are often formed from large supercell storms which are high energy systems, if a mesocyclone occurs within, a tornado may form. Tornadoes can also be formed when hurricanes make landfall along the rainfall bands due to the different air masses involved.

Where Can Tornadoes Occur?
Tornadoes have been observed on every continent other than Antarctica but there are areas which have a higher occurrence than others. The US has the most tornadoes annually, normally between 800-1000 a year; many of these occur in 'Tornado Alley', this area includes the states of Oklahoma, Texas, Kansas, Nebraska. These states lie between the Rocky Mountains in the West and the Appalachian mountains in the East which is significant as the location of these moutnains aids tornado formation. Great Britain has the highest occurrence of tornadoes per square mile but these are normally considerably weaker than their US counterparts. Bangladesh and Argentina also get a number of tornadoes; this could be due to the similar topography to the US. 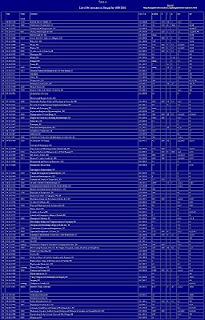 How Are Tornadoes Measured

Tornadoes are measured using the Fujita Scale proposed by T. Theodore Fujita in 1971. The scale has 6 levels of severity ranging from F0 to F5. The table below shows a simple explanation of the damage and the possible wind speeds associated with the damage.However you may kindly check latest updates on measurement issue - as there have been new methods suggested time to time.