Asteroids are thought to be celestial bodies that preserve information from the time of the Solar System's formation. If we collect a sample from an asteroid and bring it back to Earth to carry out precise research on it, we can gain some precious clues to understand the origin and evolution of the Solar System. 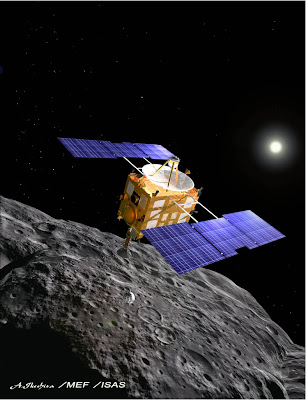 Bringing back a sample from a celestial body in the Solar System is called "Sample Return." "HAYABUSA" is a probe to verify the practicality of acquired technology developed to archive future full-scale "sample return missions."

"HAYABUSA' was launched aboard the M-V Launch Vehicle on May 9,2003. It was accelerated by a swing-by of the Earth in May 2004 and reached its target Asteroid Itokawa on September 12,2005, after traveling about 2 billion kilometers. in September and October that year, "HAYABUSA" completed the most remote-sensing and measurement of the geometry of Itokawa and made two landings in November to collect a sample from Itakawa.

Through scientiﬁc observations performed during "HAYABUSA's" stay on Itokawa various knowledge was obtained including on its gravity and surface condition. The achievements of "HAYABUSA" were featured in the scientiﬁc magazine, "Science."

Hayabusa was launched on May 9th, 2003 by M-V rocket and operated for approximately seven years. During its operation, JAXA was able to achieve the difficult mission including Hayabusa's sample capture attempt after its touchdown on the asteroid named Itokawa, and Hayabusa’s return to the earth overcoming many hardships.


Here is Gist of its of Journey (Click to Enlarge) 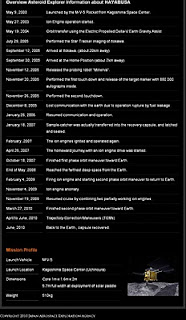 Historic Effort - Planetary Society India Salutes JAXA and Congratulates people of Japan :
If Hayabusa is indeed carrying samples from the asteroid, it would be only the fourth sample return of space material in history — including the moon matter collected by the Apollo missions, comet matter by Stardust and solar matter in the Genesis mission. 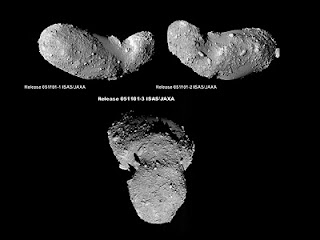 Scientists are Wondering why are parts of this asteroid's surface so smooth? It may have to do with the dynamics of an asteroid that is a loose pile of rubble rather than a solid rock.
The unusual asteroid is visited by the Japanese spacecraft Hayabusa  has documented its unusual structure and mysterious lack of crater.

Hayabusa  touched down on one of the smooth patches, dubbed the MUSES Sea, and collected soil samples that will eventually be in hands of scientists on earth after today's re entry of the capsule for analysis.