On 3rd June 2010 Jupiter was impacted which was recorded by Anthony and Christopher from their personal telescopes at 20:30 UT June 3, 2010. Anthony Wesley was first to note flash of an impact on jupiter, which was also captured and confirmed by Christopher Go of the Philippines. 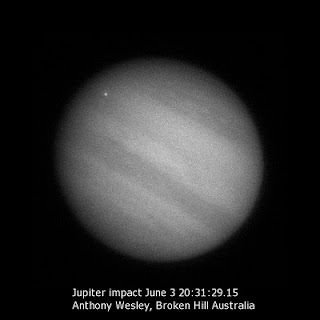 The nature of the impactor is presently unknown. It might have been an asteroid or a comet. In either case, a dark and cindery debris field is expected to develop around the impact point; as seen in previous Jupiter impacts.

Astronomers have witnessed this kind of cosmic event before and found scars left behind on jupiter.During the course of a week in July 1994, more than 20 pieces of Comet P/Shoemaker-Levy 9 (SL9) plunged into Jupiter's atmosphere. In 2009 July 19 similar impact occurred noted by Anthony Wesley.