Will the World End in 2013 ? Geo Magentic Storm - Sun and Recent NASA Report

Since Yesterday we have been recieving various queries from Media locally in India stating "NASA REPORT " "EARTH BLOCKOUT" OR END OF WORLD "2012 OR 2013". So you will discover what exactly is expected to happen in next few lines.

BEFORE WE GO ANY FURTHER we suggest you to read following article SUN SPITTING SOLAR PARTICLES WILL IT REACH EARTH click here written by us in April 2010 along with video.  And also see this video of an April 2010 event click here. Also kindly read about Geomagnetic storm before going to questions. 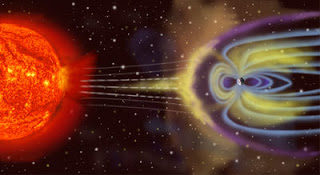 Geomagnetic Storm : A geomagnetic storm is a temporary disturbance of the Earth's magnetosphere  caused by a disturbance in space weather. Associated with solar coronal mass ejections (CME), coronal holes, or solar flares, a geomagnetic storm is caused by a solar wind shock wave which typically strikes the Earth's magnetic field 24 to 36 hours after the event. This only happens if the shock wave travels in a direction toward Earth. The solar wind pressure on the magnetosphere will increase or decrease depending on the Sun's activity. These solar wind pressure changes modify the electric currents in the ionosphere.
A. ) What is the Source of this News :
Before i go any further i like to tell the source of this outburst of news on 2013.
1. As the Sun Awakens, NASA Keeps a Wary Eye on Space Weather published on 4th June 2010.
2. Severe Space Weather Events—Societal and Economic Impacts report of National Academies of Science.
3. Space Weather Enterprise Forum 2010 conducted in Washington 8th June 2010.
4. Of course stories by enthusiasts across the world combining all above and their imaginations. As one such story i came across which says
"If you’ve had your fill of apocalyptic scenarios, earthquakes, volcanoes and global warming, here comes a new threat which may wipe out the world in 2013. Imagine a scene from any of Hollywood’s disaster films. An eerie scene where mobile phones go on the blink, GPS is knocked out, TVs go blank and the world is plunged into chaos."

"The sun is waking up from a deep slumber, and in the next few years we expect to see much higher levels of solar activity. At the same time, our technological society has developed an unprecedented sensitivity to solar storms. The intersection of these two issues is what we're getting together to discuss."
Richard Fisher, head of NASA's Heliophysics Division

iii. Intense Solar Activity and knock out punch: quoting NAS report this release says how this active sun will impact us. the release says Smart power grids, GPS navigation, air travel, financial services and emergency radio communications can all be knocked out by intense solar activity.

v. Mitigation – advance forecast – safe mode/disconnections – NOAA’s Role of Accurate Forecasting : Much of the damage can be mitigated if managers know a storm is coming.

Putting satellites in 'safe mode' and disconnecting transformers can protect these assets from damaging electrical surges. Preventative action, however, requires accurate forecasting—a job that has been assigned to NOAA.

Further it talks about three missions of special significance: STEREO, SDO and ACE which are contributing immensely to effect.


C). What is this 2013 Year. Why it is important ?
" As we approach the next peak of solar activity expected in 2013, our nation faces multiplying uncertainties from increasing reliance on space weather-affected technologies for communication, navigation, security, and other activities, many of which underpin our national infrastructure and economy. We also face increasing exposure to space weather-driven human health risk as trans-polar flights and space activities, including space tourism, increase"

D) 2013 - Solar Activity - Concern ?  So from above words published in Space Weather Enterprise Forum 2010 we can understand that next peak of Solar Activity is expected to be in 2013. Based on the recent events of Coronal Mass Ejection (CME ) events on sun, number of spots (after being spotless for 804 days since year 2004.

E) What exactly is expected to happen in 2013 ? Does ALL solar activity impact Earth? Why or why not?
We can divide solar activity into four main components. i. Solar flares, ii. coronal mass ejections, iii. high speed solar wind, and iv. solar energetic particles.
i. Solar flares impact Earth only when they occur on the side of the Sun facing Earth. Because flares are made of photons, these travel out directly from the flare site, so if we can see the flare, we can be impacted by it.

ii.Coronal mass ejections, also called CMEs, are large clouds of plasma and magnetic field that erupt from the Sun. These clouds can erupt in any direction, and then continue on in that direction, plowing right through the solar wind. Only when the cloud is aimed at Earth will the CME hit Earth and therefore cause impacts.

iii.High speed solar wind streams coming from the Sun come from special areas on the Sun known as coronal holes. These holes can form anywhere on the Sun and usually only when they are closer to the equator than to the solar poles do the winds they produce impact Earth.

iv. Solar energetic particles are high energy charged particles, thought to primarily be released by coronal mass ejections. Where the cloud of a CME plows through the solar wind, the solar energetic particles are travelling much faster and because they are charged, must follow the magnetic field lines that pervade the space between the Sun and the Earth. Therefore, only the charged particles that follow magnetic field lines that intersect the Earth will have an impact on Earth.


G). When was such famous event happen in past  and recorded?
The strongest geomagnetic storm on record is the Carrington Event of August-September 1859, named after British astronomer Richard Carrington who witnessed the instigating solar flare with his unaided eye while he was projecting an image of the sun on a white screen

Geomagnetic activity triggered by the explosion electrified telegraph lines, shocking technicians and setting their telegraph papers on fire; Northern Lights spread as far south as Cuba and Hawaii; auroras over the Rocky Mountains were so bright, the glow woke campers who began preparing breakfast because they thought it was morning. Best estimates rank the Carrington Event as 50% or more stronger than the superstorm of May 1921.


H). When was the recent time such event occurred effecting people and what was its impact like ? The most famous geomagnetic power outage happened during a space storm in March 1989 when six million people in Quebec lost power for 9 hours. 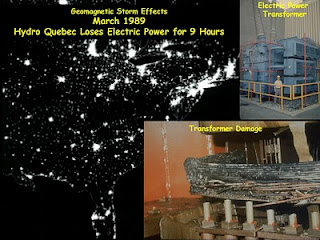 I). What will happen if the 1859 event was to repeat ?And Why should we worry about intense activity in 2013?
"A contemporary repetition of the Carrington Event would cause … extensive social and economic disruptions," the report warns. Power outages would be accompanied by radio blackouts and satellite malfunctions; telecommunications, GPS navigation, banking and finance, and transportation would all be affected. Some problems would correct themselves with the fading of the storm: radio and GPS transmissions could come back online fairly quickly. Other problems would be lasting: a burnt-out multi-ton transformer, for instance, can take weeks or months to repair. The total economic impact in the first year alone could reach $2 trillion, some 20 times greater than the costs of a Hurricane Katrina or, to use a timelier example, a few TARPs.

J)  Doomsday talk of 2012 Event already cause major concern to people ? Does this all necessarily means that Life on Earth will end in 2013?
No. there is no major threat to life directly in year 2013. Whereas 2012 Events talked use lots of scientific facts mix it in such a way to prove prediction of Mayan's is correct.


K.) There is theory that says LIFE ON PLANET MARS got extinct due to removal of Magnetosphere of Mars caused by solar acitivity ?
We will answer this question in  a detailed article later.

L. ) What is the solution ?
i. The report ends with a call for infrastructure designed to better withstand geomagnetic disturbances, improved GPS codes and frequencies, and improvements in space weather forecasting.
ii.Reliable forecasting is key. If utility and satellite operators know a storm is coming, they can take measures to reduce damage—e.g., disconnecting wires, shielding vulnerable electronics, powering down critical hardware. A few hours without power is better than a few weeks.