Here is the gist of updated i wrote on Facebook:

Latest Update (at 9.47 a.m) may have fallen in China/Myanmar : here is the image of ROSAT... During the Entry time frame, the satellite passed over the Indian Ocean and parts of Asia (Myanmar and China). USSTRATCOM predictions had estimated re-entry to occur after the perigee at ~2:00 UTC for a crash just south of Chongqing, China - the largest city in the world 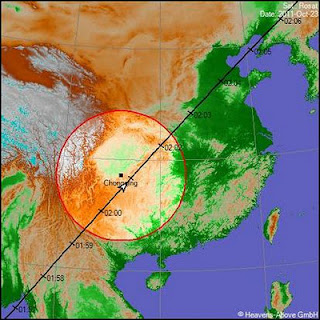 Raghunandan Kumar N. Sri
Latest Update (at 8.55 a.m) Satellite (ROSAT): DLR-German AeroSpace Center confirmed that ROSAT Re-entered earth atmosphere between 7.15a.m to 7.45 a.m. But they are not sure if it debris reached earth's Surface ...Here is the statement "ROSAT has re-entered Earth's atmosphere. There is currently no confirmation if pieces of debris have reached Earth's surface."..Interestingly CBC News (wrote a ar...ticle 15 mins ago http://bit.ly/pEc29j Fox News http://bit.ly/oSoyTL

Even one half hour event (nw 9.12 a.m)..they still expect rosat to fall.....Two minutes ago yahoo wrote (after 1 Half hr of the event http://yhoo.it/mZ3hmW). Local/National there is no news at all.as if nothing happened...Whereas there is no alert/info on any indian govt sites..whereas DLR says rosat entered..but reach earth or not (even after 1 half hour)...is surprising to me...All above questions only one thing.How alert are we...for such dangers?