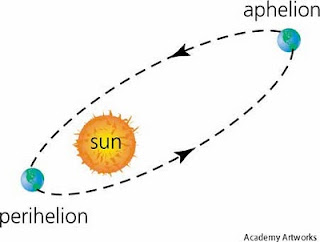 A distant sun means less sunlight for our planet. "Averaged over the globe, sunlight falling on Earth at aphelion is about 7% less intense than it is at perihelion," says Roy Spencer of NASA's Global Hydrology and Climate Center (GHCC).

“When we are at aphelion, the sun appears smaller in the sky (by 1.7%) and global solar heating is actually a little less (by 3.5%) than the yearly average” Dr.Tony Phillips of Spaceweather.

Distance not Reason for Season: Commonly it is believed that Distance of Earth to Sun decides the season or temperature on earth. However it is not true. Actually axial tilt (approx. 23.5 Degree) of Earth on its axis while revolving around Sun regulates seasons on planet Earth with one of the Hemisphere facing away or towards Sun.

Evidence/Example: It may be noted though Earth is closest to Sun in beginning of year 2013 it was winter in India& most of countries in Northern Hemisphere. Whereas it’s summer in Southern Hemisphere countries. Also in July when Earth is at farthest point from Sun it’s mostly hot in India. One can note this when the cloud is clear. This clearly shows for people to observe Distance of Earth to Sun doesn’t decide the Season but its tilt.