UN Call on Asteroids - Story of 3 Asteroids in March 2014

Last few days there has been sudden buzz about Asteroids on Internet . We here share with you closest approach three such objects in March 2014 and also ask for Serious view of Governments. 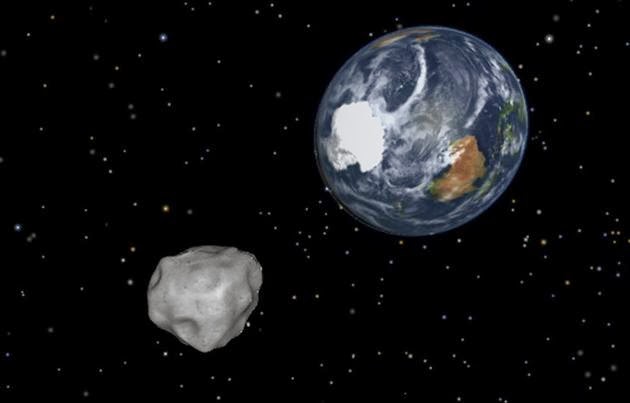 This space rock called "Asteroid 2014 EC" was discovered on 4th March. What is interesting is, this asteroid will pass very closely from Earth at Distance of 59,132 Km. The Size of this Asteroid is 10 meters (32 Ft). At the time of Closest approach it will be travelling at the speed of 15 km/sec.

This Asteroid orbits our Sun once in 644 Days.

Though discovered two days ago scientists based on various simulations/calculations found that this asteroid in the past Missed Planet Venus in Feb 1947.

Scientists say there is no danger of this asteroid hitting Earth.

Interestingly before this article was written another asteroid with size of 31 meters (101 Ft) flew by earth at distance of 3,47,929 Km. At the time its closest approach today morning it was travelling at speed of 14 km/Sec.

Interestingly this Asteroid goes around Sun once in 1192 days (3.26 years)

Further another asteroid will have its closest approach on  11th March 2014 .

The Size of this asteroid is 190 meters or 623 ft . One of the Biggest discovered and having closest approach this year so far.  It has been classified as Near Earth Object and Potentially Hazardous Asteroid.

At time of its closest approach on 11 March it will be travelling at speed of 19 km/sec.

Interesting this asteroid was discovered recently on 11 Feb 2014.This asteroid goes around Sun once in 1153 Days (3.16 years)

The Next time this asteroid has its closest approach to Earth is on 31 July 2017.

Conclusion :  We may write number of articles on such events. However the past of Planet Earth and recent events (like in Russia Chelyabinsk) remind us of serious look we need to take.

The Chelyabinsk meteor was a near-Earth asteroid that entered Earth's atmosphere over Russia on 15 February 2013 at about 09:20 YEKT (03:20 UTC), with a speed of 19.16 +/- 0.15 kilometres per second (42,900 mph or 69,000 km/h), almost 60 times the speed of sound. It quickly became a brilliant superbolide meteor over the southern Ural region. The light from the meteor was brighter than the Sun, even at 100 km distance. It was observed over a wide area of the region and in neighboring republics. Eyewitnesses also felt intense heat from the fireball.

Due to its enormous velocity and shallow atmospheric entry angle, the object exploded in an air burst over Chelyabinsk Oblast, at a height of around 29.7 km (18.4 miles, 97,400 feet). The explosion generated a bright flash, producing a hot cloud of dust and gas that penetrated to 26.2 km, and many surviving small fragmentary meteorites, as well as a powerful shock wave. The atmosphere absorbed most of the object's energy, with a total kinetic energy before atmospheric impact equivalent to approximately 500 kilotons of TNT (about 1.8 PJ), 20–30 times more energy than was released from the atomic bomb detonated at Hiroshima.

Our Effort : Simple search in this site reveals the number times we have asked for Serious effort regarding asteroids by governments and organisations.

Last year on the occasion of Asteroid 2012 DA14  flyby 14/15 February 2013 we conducted awareness campaign and try to raise the issue of Asteroid before public
http://www.youtube.com/watch?v=U9u5-kBeN4I

US Govt response to 2013 Russian Event : Here is the link to US Govt's Sub Committee hearing on last year Chelyabinsk event in Russia.  https://science.house.gov/press-release/smith-asteroid-meteor-stark-reminders-need-invest-space-science

The question we like to ask how many Nations across the world are hearing this call seriously ? What is India's response.