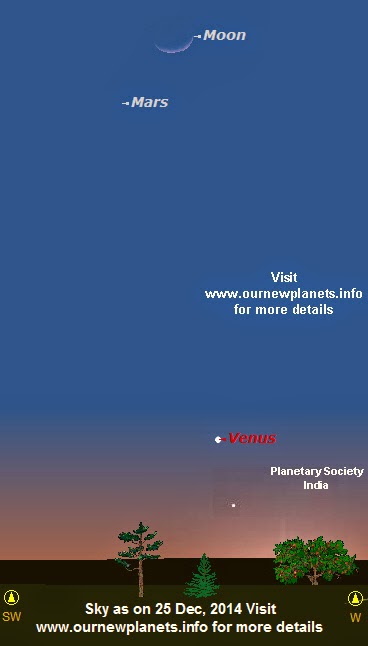 Year 2014 ends with return of Planet Venus to evening sky. Starring in the Western Skies is Venus to enthrall people few days before Christmas until 2015 August. Appearing as a bright star like object in west Direction it already became a point of curiosity for many. To spot it with naked eye, all one has to do his to look in South-West Direction few minutes after Sunset to 30-40 minutes.

As days pass, it’s going to be a brilliant object visible in the western sky after sunset. Students enjoying Christmas vacation gazing at sky are asking “What is that bright object?” in West. Unaware about scientific fact some are suspecting it to be a alien ship which appears after Sunset for 30 mins. and disappears everyday above their house.

Venus would remain as a brilliant beacon in the west sky after sunset for many days to come.  Venus may be called an inferior planet in astronomical terms, but it is a superior delight for all to see.

Directions – to Spot Venus – Evening Sky  - after sunset in west –  Best Opportunity from now -  until 1st Week of  Aug 2015 : few minutes after Sunset if one can looks towards south- west direction towards the side where Sun Set . He or She can find a spot bright star like object which doesn’t twinkle compared to stars as it is a  Planet i.e. Venus. It can be spotted until 30- 40 minutes after Sunset.

Mysterious celestial spectacle for ages: Planet Venus since time immemorial was thought to be two different objects. As sometimes it appeared in morning or evening skies. It was understood to be Morning/Evening Star unaware about scientific fact.

However Planet Venus revolution around Sun and seen from earth determines its position in our sky. So in a Year Venus is either visible mostly in Morning or Evening skies. i.e. Venus based on its journey around Sun  in a given year appears in morning sky or evening sky as it orbits around Sun


Star or Planet:  to differentiate planets from stars its important to remember that as seen from earth though planets shine, they don’t twinkle/blink unlike stars.

Venus to be visible till August 2015 – in Evening: from now till 1st Week of August in 2015 people can spot Planet Venus with ease everyday towards west immediately after Sunset.