Progress M-27M (Russian: Прогресс М-27М), identified by NASA as Progress 59 or 59P, is a Progress spacecraft used by Roscosmos in an unsuccessful attempt to resupply the International Space Station (ISS) in 2015

When is this spacecraft expected to reenter Earth Atmosphere ?

In the above table based on United States Strategic Command we can say
in Indian Standard Time
This Space craft can reenter on 8th May 2.29pm ( add (+) or Substract (-) 24 hrs i.e. timings for reenter into Earth atmosphere is expected between 2.29pm on 7th May to 2.29pm on 8th May.

As Per Russian Federal Agency ROSCOSMOS - TIMINGS :
As reported in Russia Beyond the Headlines In a statement issued by Russian Federal Space Agency Roscosmos
"The spacecraft will cease to exist approximately between 1:23 a.m. and 9:55 p.m. on May 8," Roscosmos said in a statement shared with Interfax-AVN on Wednesday.

At time Reenter into Earth Atmosphere where will this Spacecraft in the Sky?

The United States Space Surveillance Network, which is part of the U.S. Strategic Command (USSTRATCOM), has reported Spacecraft Progress M-27M may end its ballistic existence and reenter the earth's atmosphere over the Horn of Afric..
Unburned Debris:spacecraft's unburned debris may fall on the earth in the western part of the Indian Ocean

Here is the Predicted Reentry Image generated by satview.org 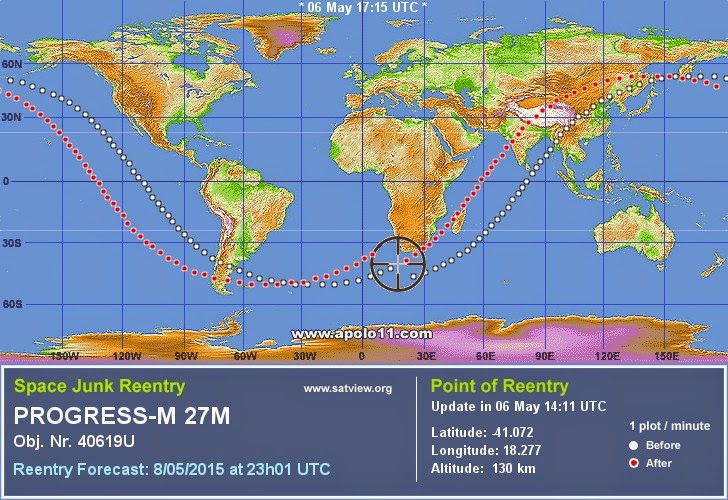