Away from city lights from 4th December, 2017 to 17th December, 2017 people can witness annual celestial spectacle of Geminids Meteor Showers (ఉల్కాపాతం/الکا شاور / उल्कापात) from pollution free dark clear skies. #geminid
As per the International Meteor Organization (IMO) this meteor shower peak is expected on the night of 13th/14th December 2017 with maximum of up to 120 Meteors per hour to be visible from clear dark skies. In 2016 Due to Moon meteors were outshined by Moonshine hence was not appreciated. Whereas 2017 in spite presence of Crescent Moon will not mar the event. 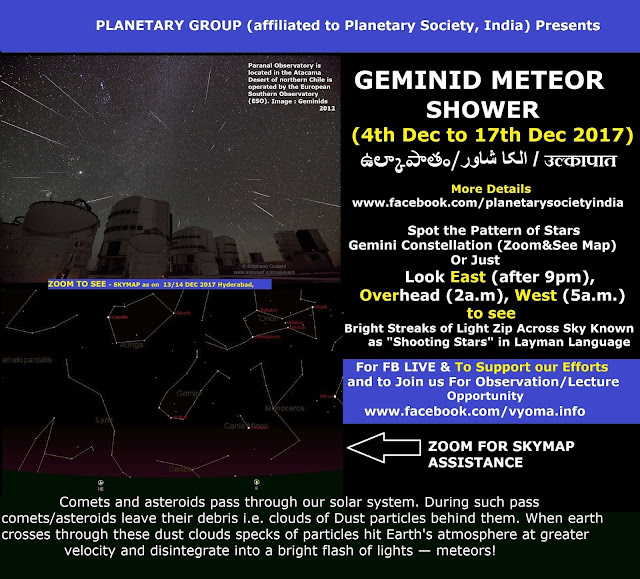 Why/How Locate Gemini – What you will see? –   the Twins (Pattern of Stars)?  Why Wait till 9pm? 3 hours after Sunset from 10pm onwards looking between North East and East Direction one can locate Gemini Constellation (two bright Stars parallel to each other – in the pattern of Stars appearing/known since ages as Twins).
It would seem as if these bright streaks of light are emanating near from star called Castor in Gemini constellation where the radiant of this meteor shower lies. Telescopes/Binoculars are not required to see Meteor Showers. 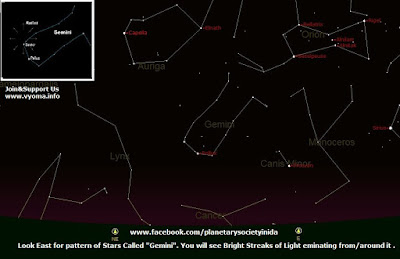 How many meteors can be seen in an Hour?  Depending on observer’s location and skies above, many tens of meteors per hour will be visible with highest rates reaching up to a max of 120 ZHR (Meteors per Hour) on 13th/14th December, 2017. 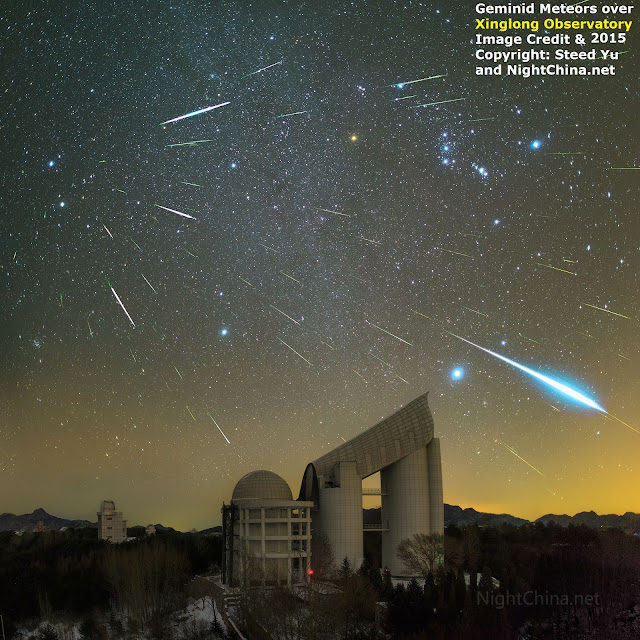 Directions – Time – Evening, Midnight & Morning – till 17th Dec – Best Time to See:  People can observe this meteor shower by looking North East and East Direction from 10.00 p.m. onwards, while they are visible near to mid of sky by the time it is Midnight whereas early Morning walkers can see meteors in the western sky in the morning before Sunrise. However 2 a.m. in the Night is best time to observe the meteors. 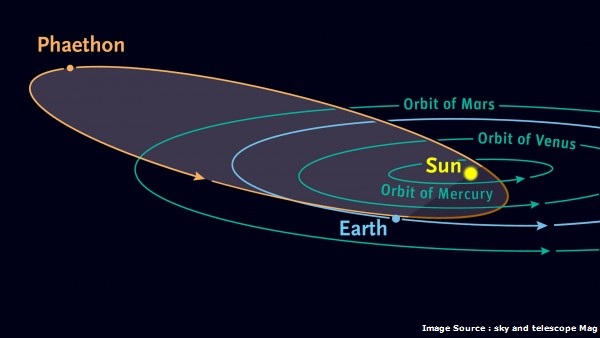 Geminids Meteor Shower:  A meteor is a shooting star (layman’s Language), space dust/debris about the size of a grain of sand or more. The dust hits the earth’s atmosphere and burns up into a blaze of light. When greater number of meteors are visible on regular scale (mostly annually) in one part of sky due to a parent body then it’s referred as Meteor Shower.

Where does space dust come from? Comets and asteroids pass through our solar system. During such pass comets/asteroids leave their debris i.e. clouds of Dust particles behind them. When earth crosses through these dust clouds specks of particles hit Earth's atmosphere at greater velocity and disintegrate into a bright flash of lights — meteors!

Specialty of Geminids Meteor Shower: The Geminids are one of the most popular annual meteor showers occurring visible from India apart from more than dozen such meteor showers. While most meteor showers come from comets, Geminids has a its origin from an Asteroid—a near-Earth object named 3200 Phaethon. Asteroids don't normally spew dust/particles like comets into space. However it is believed 3200 Phaethon its once extinct comet. Presently most of the experts call it “Rock Comet”.