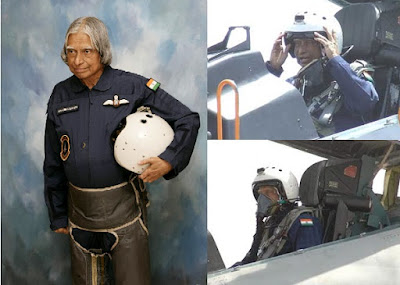 The above image is when he flew in Sukhoi-30 MKI at the Lohegaon Air Force Base in Pune on 8June2006.

In the above wikipedia article sources are quoted bit if you click them they don't lead to any official UN website but local media news articles. Hence articles on Wikipedia are sometimes misleading.

Failures Stepping Stones to Success - Failed Dream of Dr. Kalam to become Airforce Pilot in 1958:
Click on this link https://www.thehindu.com/books/books-authors/failed-in-my-dream-of-becoming-pilot-abdul-kalam-in-new-book/article5035287.ece  to read an interesting article in which Dr.Kalam  explained how he failed to become a Airforce Pilot in 1958.

These days for very small failure we get so much upset ...example not getting good marks, failing in exam, someone didn't put a like a post etc..etc..

In the article link  .. you can see it was Dr.Kalam's dream in 1958 to become a Pilot ..but he was not selected because he got 9th place whereas there were 8Posts.

Instead of being depressed missing to be Pilot so closely having cherished the dream to fly from Childhood. Dr. Kalam made his failure.. a Stepping Stone for success..and went on to give India a new edge with his efforts on Missiles as Scientist Engineer.

And later went on to became Supreme Commander i.e President of India is also  "Commander in Chief" of Indian Armed Forces (Army, Navy& Airforce) with supreme power to declare war or conclude peace.

So much to learn from such great people. It's great he failed to become a pilot else its difficult to imagine today's PSLV or advanced Missiles in India within 3-4 Decades of Indian Independence.So great even after death not just success... great people's failure also  inspires us...