About Formation of Society – 9th anniversary Celebrations:
17th October 1998: The Society was founded in 1998 by Mr.N.Sri Raghunandan Kumar
basically to create awareness among general public particularly student community .Guided by its aims and objectives Society has been successful with various achievements popularizing space science.

17th October 2003 : After learning from over 50 societies , United Nations Organisation and various societies the memorandum containing aims and objectives, bylaws were prepared under the guidance of the present secretary . These documents came to effect on 17th October 2003 Under Andhra Pradesh Societies Registration Act 2001 after registration with respective government authorities.

9th Anniversary Celebrations: this year celebrations are very cardinal to the society considering this year being “ 50th Year of Space age”, “100th Year of Nizamia Observatory” and various other United Nations declared International year of Planet earth, International Helosphysical year , Indian Mission to Moon Chandrayaan being launched in 2008 and year 2009 being declared as International Astronomical year.

Month of October features various constellations, star clusters which can be identified with naked eye on the eve of societies 9th anniversary celebration here we like to present information about Planet Jupiter and Planet Mars
OBSERVE - PLANETS JUPITER AND MARS


Beginning of First Week of October marked the beginning of Clear Night Skies as the monsoons already having come to end giving greater opportunities for amateur astronomers and general public to enjoy the night skies.

Spotting Planet Jupiter – Using Moon: To spot Planet Jupiter after Sun Set one has to look towards South West Direction, where one can spot Planet Jupiter towards right below Moon on 17th October, 07. Jupiter can be seen upto 9.00 p.m. after which it would set in the direction between South west and West. Jupiter would look like a bright star like object (which is not a star but Planet).

Spotting Planet Mars: these days Mars can be seen rising in the eastern sky and would be 11.00 pm. One has to look in the direction between North East and Eastern sky to spot the red planet Mars. Morning Walkers however can spot planet mars near to zenith above their head at 5 a.m. .

Other points: 1. Planets don’t twinkle whereas as seen from earth Stars twinkle this principle can help the planet spotters to easily locate Planet among large group of stars in the clear night sky of October, November, December.

2. However to appreciate the features of these planets one would require a astronomical telescope or binocular, but to spot them one just needs his two eyes and observation.

Kindly click on the image for large version to assist you.

Image of Planet Jupiter after Sunset on 17th October,2007 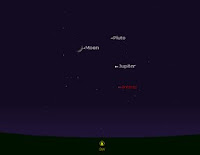 Image of Planet Mars rising in the eastern sky: