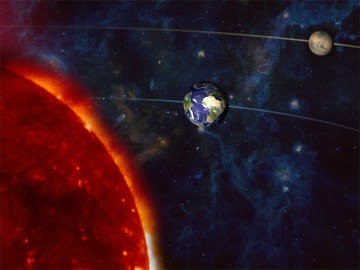 On 24th December, 2007 Planet Mars would be at Opposition. During opposition, Mars and the sun are on directly opposite sides of Earth. From our perspective on our spinning world, Mars rises in the east just as the sun sets in the west. Then, after staying up in the sky the entire night, Mars sets in the west just as the sun rises in the east. Since Mars and the sun appear on opposite sides of the sky, we say that Mars is in "opposition."

Recent Closest Approach was on 18th December,07 : Mars was closest to Earth on December 18 at a distance of 88 million kilometers. That means it is significantly farther than it was in 2003, but closer than it will be at its next opposition in 2010.

How Does Mars Look ? How to Spot Mars , Venus and Saturn ?

In December 2007, mars will be as bright as the brightest star in the sky, but not nearly as bright as Jupiter (present magnitude -1.8) or Venus (presently -3.8). Mars would shine in the Evening skies at -1.6 magnitude till December 29 th 2007 whereas it was very faint to spot in year begning at 1.4 magnitude.

Spot Mars with Naked Eyes : Interested General public can spot Planet Mars in the evening skies. One has to look toward direction between North East and East after Sunset. Where as Morning Walkers can spot Mar in Western Sky before Sunrise.

On 24th December, 07: Because of Opposition Planet Mars Can be rising exactly opposite to sun set. Whereas it can be seen setting while Sun Rises on 25th Dec,07.

With the help of Moon : Mars can also be spotted using moon as it would be just above Moon in the evening and below moon during morning hours as seen from earth.

Its an excellent Opportunity for People to spot Mars starting this 24 th Dec,07 whereas after 30th December, 07 it will still be visible with continued decrease in brightness upto September 08 next year in evening skies

Spotting Venus and Saturn : Saturn can be spotted by 11.00 p.m. one has to look near East direction. Whereas Venus can be spotted rising around 4. a.m. between East and South East Direction.

Click On the Images below to see bigger picture 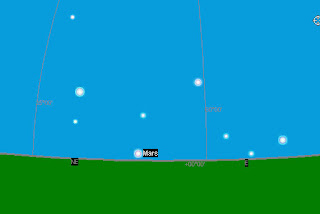 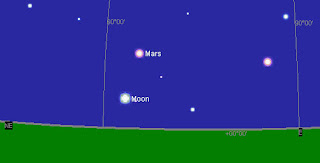