I take this opportunity to use another day "Valentines Day", to promote what i deeply love from my heart and which has been core of the Planetary Society, India.

Before i write further following is my understanding of the concept we want to propagate, which otherwise these days is understood to be some thing related or between any two individuals. Hope you understand what i am referring to.....in it true sense

The love of a Farmer towards his land and his family produces food for all of us. Otherwise in even in modern India/world we will not change our habits to start eating “Money” in place of Food.

Love of the parents towards their “children's future” nurtures the better citizens of the world.

Love of the soldiers towards their country makes our life secure to live.

Love of scientists towards their work produces solutions for the problems or challenges of mankind.

Love for Planet Earth got Al Gore and Shri Rajendra K. Prochuri (on behalf of IPCC) Nobel for their concern and work on Global Climate Change.

Let us promote Universal Brotherhood and “live in harmony with nature” protecting earth a a unique planet with life in true spirit of “2008 - International Year of Planet Earth”. Just remember these words
“Earth provides enough to satisfy every man's need, but not every man's greed”
– Mahatma Gandhi. 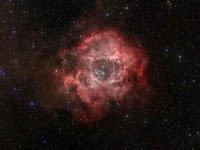 This image is not the only cosmic cloud of gas and dust to evoke the imagery of flowers. A long stem of glowing hydrogen gas in the region included in the composition. At the edge of a large molecular cloud in Monoceros, some 5,000 light years away, the petals of this rose are actually a stellar nursery whose lovely, symmetric shape is sculpted by the winds and radiation from its central cluster of hot young stars. star formation is an on going process in the region. 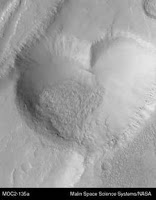 This image is actually a pit formed by collapse within a straight-walled trough known in geological terms as a graben.The heart-shaped pit is about 2.3 kilometers (1.4 miles) at its widest.

The graben in which the pit formed can be seen in the full MOC image, depicted on the right (above). Graben are formed along fault lines by expansion of the bedrock terrain (see "Chain of Pits on Pavonis Mons" for more information). 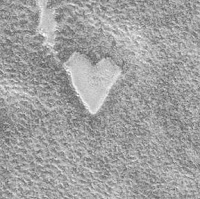 This is unique view of a bright, heart-shaped mesa in the south polar region on November 26, 1999. This feature is located in the Promethei Rupes region near 79.6°S, 298.3°W. The heart is about 255 meters (279 yards) across. The presence of this mesa indicates that the darker, rough terrain that surrounds it was once covered by a layer of the bright material. 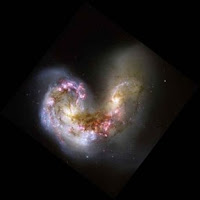 This Hubble image of the Antennae galaxies is the sharpest yet of this merging pair of galaxies. As the two galaxies smash together, billions of stars are born, mostly in groups and clusters of stars. The brightest and most compact of these are called super star clusters.
In other words: These are the famous Antenna Galaxies, two galaxies in the act of colliding. They are not usually rotated this way, so the heart-shape isn’t obvious.
The two galaxies are merging, becoming one. For millions of years they have been dancing this tango, at first reaching out long arms to each other, then sweeping past each other perhaps several times before finally uniting.
And the outcome of such a marriage is similar to that in humans… birth! Those reddish pink regions are where countless millions of stars are being born before our eyes. The ultimate product of gravity.

This is large emission nebula dubbed IC 1805 looks, in whole, like a human heart. The red glow and the larger shape are all created by a small group of stars near the nebula's center The Heart Nebula is located about 7,500 light years away toward the constellation of Cassiopeia. 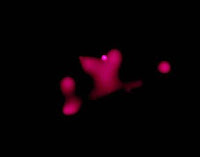 This image is this heart-shaped cloud of hot, x-ray emitting gas from the central region of a star cluster called NGC 346.

Ok, Then why worry about those so called Heart symbol, when it doest resemble the real natural human Heart?

Yes, it right question. The strength of our society has always been in its ability to identify its projects, activities with common man and lead them to cosmic understanding. Hence this symbol above signifies the choice of people around out the world.

However maybe because this is a science blog we always speak for science. Hence if people were to have different symbol, we would certainly have found some nebulae, features on mars etc.. which would seam to look like that probable shape or sign.