Phoenix a Scout Mission of NASA would land on the surface of Mars On 26th May, 2008.

Phoenix is a robotic spacecraft on a space exploration mission to Mars under the Mars Scout Program. The scientists conducting the mission will use instruments aboard the Phoenix lander to search for environments suitable for microbial life on Mars, and to research the history of water there. Phoenix launched successfully on August 4, 2007, and is scheduled to land on Mars on May 26, 2008 .


If successful, Phoenix will be the sixth lander to successfully touch down on Mars and the first since Viking 1 & 2 in 1976 to land using powered descent.

Further as per Indian Standard Time Phoenix would land on surface of mars around 6.30 a.m. on 26th May, 2008. (kindly check actual timings). 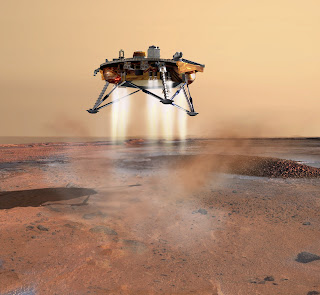 Phoenix uses hardware from a spacecraft built for a 2001 launch that was canceled in response to the loss of a similar Mars spacecraft during a 1999 landing attempt. Researchers who proposed the Phoenix mission in 2002 saw the unused spacecraft as a resource for pursuing a new science opportunity.

Where Will it Land ?

"The Phoenix mission not only studies the northern permafrost region, but takes the next step in Mars exploration by determining whether this region, which may encompass as much as 25 percent of the Martian surface, is habitable," said Peter Smith, Phoenix principal investigator at the University of Arizona, Tucson.

What Will it Do ?

The solar-powered robotic lander will manipulate a 7.7-foot arm to scoop up samples of underground ice and soil lying above the ice. Onboard laboratory instruments will analyze the samples. Cameras and a Canadian-supplied weather station will supply other information about the site's environment.

What is its Goal ?
One research goal is to assess whether conditions at the site ever have been favorable for microbial life. The composition and texture of soil above the ice could give clues to whether the ice ever melts in response to long-term climate cycles. Another important question is whether the scooped-up samples contain carbon-based chemicals that are potential building blocks and food for life.

The Phoenix mission is led by Smith with project management at JPL. The development partnership is with Lockheed Martin, Denver. International contributions are from the Canadian Space Agency; the University of Neuchatel, Switzerland; the universities of Copenhagen and Aarhus, Denmark; the Max Planck Institute, Germany; and the Finnish Meteorological Institute.

The multi-agency program is headed by the Lunar and Planetary Laboratory at the University of Arizona, under the direction of NASA. The program is a partnership of universities in the United States, Canada, Switzerland, Denmark, Germany and the United Kingdom, NASA, the Canadian Space Agency, and the aerospace industry. Phoenix is planned to land in the planet's water-ice-rich northern polar region and, if this is successful, will use its robotic arm to dig into the Arctic terrain.