Planet Venus: Planet Venus has been a great curious object for ancient people. It appeared like a star. At one part of the year it could be seen in the Morning skies and other in the Evening skies. Hence it got the name the Morning/Evening Star in various civilization across the world. However, now its very much clear that its not Star but a Planet. These days Venus can be spotted after Sun Set in the Western Sky.

Planet Jupiter: Jupiter is the Fifth Planet and also known as king of planets . Since Jupiter Opposition since July 9 this year it is visible in the evening skies.

Position of Moon : our moon is an excellent tool to locate planets. Because every day you can see moon near a new destination i.e. it is visible near a new star or planet than the previous day because of its motion around earth. .

Conjunction: It means that, as seen from some place (usually the Earth), two celestial bodies appear near one another in the sky. 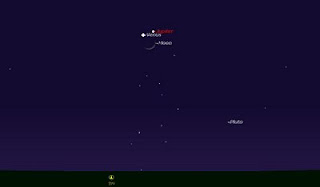 As you may note from above image there is no unhappy face/smiley. However if you can visualise you will infact find Happy Face in the sky. Reports quoting National Geographic News suggest otherwise.


Direction and Time to Look : On 1st Dec,08 After Sun set if one can look towards South West Direction one would find two bright star like object near to each other. They are actually Planets Venus and Jupiter. The brighter one among them is Venus shining at -3.7 magnitudes. Whereas Jupiter would be shining little less at -2.0.

Celestial Trio: one can also notice Crescent Moon near these two objects. This combined view of Planet Venus, Jupiter and Cresent Moon makes a splendid view to call magnificent of celestial trio. This coming together of celestial objects in the sky as seen by an observer is termed as “Conjunction”.

Enormous distance: Though these trio appear to be near each other in the sky as seen from earth. The actual distance between them is enormous.

Why They appear Close? : During the course of their orbit around sun Venus and Jupiter come in line of sight for us in such a way that, they appear to be near each other as seen from earth.

Opportunity to Spot Jupiter until second week of Jan, 09: Further if people miss this opportunity for want of Clear Skies they can still witness Jupiter and Venus (in South Western Sky) which will move apart from each other day by day. Jupiter can be spotted near to horizon unitll 2nd Week of Jan, 09. After that it cannot be seen in the evening skies