As per the report of International Meteor Organization (IMO) on 14th December, 2008 the Meteor shower will be at peak where more than 75- 120 meteors per hour are expected to be seen from dark skies.

Where to Look – Twin Stars of Gemini Constellation : meteor shower is at peak on 14th Dec, 07 at 4.30 a.m (IST) for other countries (-5.30). One has to look towards direction between North West and West Direction to spot twin stars of Gemini Constellation in the western sky one would find bright streaks of light zipping across the sky and it would seem as if they are emanating from these two stars.

Moon – Spoil sport : This year because the meteor shower is coinciding with full moon in the night skies, bright streaks would be outshined by moon. However astronomers across the world still hope to find few bright streaks of light. Few days after the peak is still a better time for observing the meteors before moon rise.

During Midnight, Evening/Morning 14-17 Dec – Follow Twin Stars of Gemini : People can witness this celestial spectacle uptill 17th of December,08. All one has to do is to spot Twin Stars of Gemini Evening : People can observe the meteors by looking towards sky above between North East and East Direction from 9.00 p.m onwards, while they are visible near to mid of sky by the time it is midnight whereas Morning walkers can see it in the western sky in the morning.

No need of Telescopes : people can directly observe this phenomena with their own eyes. Telescopes, Binocular etc.. are not required. 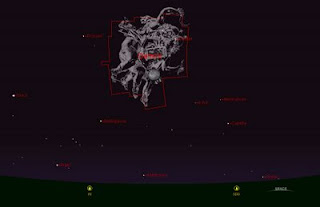