Brief About Saturn Opposition on 9th Mar, 2009 : A planet is at opposition when it is directly opposite the Sun from our viewpoint on Earth. So on 9th March,09 Sun-Earth- Saturn would be in a straight line and opposite to each other. The result is that the object is fully illuminated by the sun and appears disk-like. We see a great example of an opposition every month. Whenever there is a full moon, the moon is on one side of Earth and the sun is on the opposite side. Importantly during opposition the planet in question would be at its closest approach and thus would appear more big and brighter than usual.

Morning/Evening object : being at opposition one can notice that as sun sets in west Saturn rises in the east and visible all through the night (as it climbs highest in the sky at midnight) whereas by the time it is morning Saturn would set in the western sky when sun is rising in the east.

SPOT SATURN WITH NAKED EYE: General Public can spot the Planet with naked eye after sunset up to last week of august 2009. One has to look in exactly Opposite direction of Sun Set towards east direction above Horizon to find Saturn. 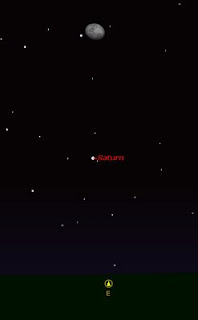 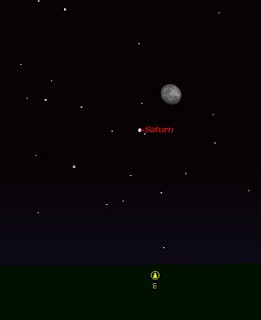 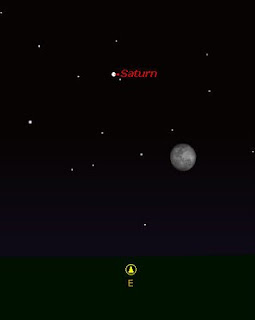 How does it look Naked eye - Telescope ? Saturn would appear as star like object for naked eye. However if one can see through telescope one can appreciate its finest features along with magnificent rings which would disappear from our view by 4th Sept,09. when the rings would tend to go edge on as we see from earth.

Observation Astronomical Telescopes: continuing its efforts society is happy to announce SATURN OBSERVATION CAMPAIGN INDIA 09 which aims to Create Awareness about Saturn. Society as a part of this Campaign (21st March to 15th August, 09 ) likes to conduct Observations at various places in the city/state with the help of its Astronomical telescopes. Society invites schools and other organizations at planetarysocietyindia@gmail.com with a request to host. Further people can visit www.ournewplanets.com for sky map assistance etc..

Saturn School Kit can be downloaded from here.You may/may not need Zip software to unzip the file.