Dear visitor if you have come here in search of info for this year Eta Aquarid Meteor Shower i.e for year 2010. Major part of the material below will be useful. Whereas to access current sky maps and directions visit click here to access the information for this 2010 event.

Meteor Shower: A meteor is a shooting star (layman’s Language) Ulka Paatham (telugu) Toot-tha Thara (hindi), space dust about the size of a grain of sand. The dust hits the earth’s atmosphere and burns up in a blaze of light.
,
Where does space dust come from? Comets and asteroids pass through our solar system. During such pass comets leave dust behind them. When earth crosses through these dust clouds we see a meteor shower. When a speck of this dust hits Earth's atmosphere, it disintegrates in a bright flash of light—a meteor!. The parent body causing Eta Aquarids Meteor Shower is the famous Comet Halley.

About Comet Halley : Halley's Comet or Comet Halley (officially designated 1P/Halley) is the most famous of the periodic comets and can currently be seen every 75–76 years during the course of its journey when its return to inner solar system orbiting around sun . Halley is the only short-period comet that is clearly visible to the naked eye (once in 75-76 years), and thus, the only naked-eye comet certain to return within a human lifetime.

This Comet has been observed by astronomers ever since at least 240 BC when it returns to the inner solar system, but it was not recognized as a periodic comet until the eighteenth century when its orbit was computed by Edmond Halley, after whom the comet is now named. Halley's Comet last appeared in the inner Solar System in 1986, and will next appear in mid-2061.

About Eta Aquarids Meteor Shower : Eta Aquarids Meteor shower are caused by flakes of dust left over by Comet Halley, which last visited Earth in 1986. Although the comet is now far away, beyond the orbit of Uranus, it left behind a stream of dust. Earth passes through the stream twice a year in May and October. In May we have the eta Aquarid meteor shower, in October the Orionids. Both are caused by Halley's Comet when its debris enters earth atmosphere zipping across the sky while it disintegrates.

The shower is named after a star called Eta Aquarii in the constellation Aquarius. The star has nothing to do with the meteor shower except that, coincidentally, meteors appear to emerge (radiate) from a point nearby.

Away from city lights from 6th May, 2009 to 10th May, 2009 people can witness annual (April 19-May 28) celestial spectacle of Eta Aquarids Meteor Shower from pollution free dark skies. 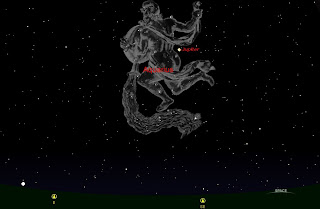 As per the report of International Meteor Organization (IMO) on 6th May, 2009 at 5.30 a.m. the Meteor shower will be at peak where more than 85 Meteors (southern hemisphere) per hour whereas 20-30 meteors (from Northern Hemisphere)are expected to be seen from dark skies. The Meteor shower are best visible from 6-10th May 09.

Where to Look – Constellation of Aquarius above South East Direction from India : Though meteor shower is at peak on 6th May this meteor shower can be witnessed until 10th May significantly from dark skies. One has to look above towards southeast Direction to spot the constellation of Aquarius in morning eastern sky one would find bright streaks of light zipping across the sky and it would seem as if they are emanating from the star Eta Aquaris . The best time is before sunrise starting 3.00 a.m. from dark skies.

No need of Telescopes : people can directly observe this phenomena with their own eyes. Telescopes, Binocular etc.. are not required.