The Japanese lunar orbiter Kaguya will end its two-year mission with a controlled impact on the Moon’s surface on June 10th at 18:30 Universal Time (00.00 a.m. 11th June,09 Midnight Indian Standard Time). The impact location is near the southeast limb at 80ºE, 63ºS. 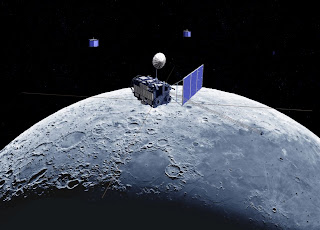 Possible Location of impact on moon : 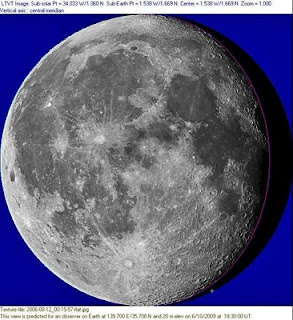 Kindly click on the image to see enlarged view to spot the location.

Near Close look at Location of Impact on Moon : 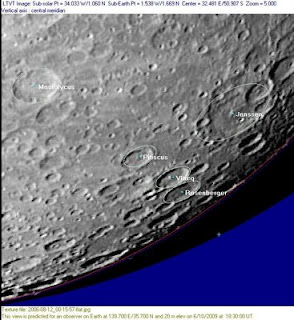 What you will see ?
The event may be visible with a bright flash or plume. JAXA is making available precise information on the projected time and location of the event.

How does it is going to hit Moon ?
Kaguya is a big spaceship. It masses 2,900 kg and will hit the Moon at an oblique angle traveling approximately 6,000 km/hr. Whether it tumbles and bounces along the lunar surface or runs headlong into some towering crater wall, no one can say. 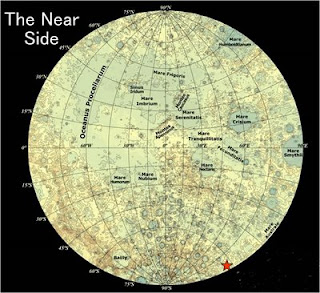 Then How does someone on earth know if Kaguya really hit Moon ?
Clues to the end of Kaguya will come on June 10th in the form of an explosive flash (or lack thereof) and high-res images of the crash site taken by future lunar orbiters.

Is this impact strange or some accident etc.. ?
All the missions at some point of time after its tenure has to expire or end. The impact of Kaguya Space is not accidental or sudden. The Japanese space agency, JAXA, has long planned to end the mission in this fashion.

Where on Moon it will impact ?
The location of the impact is very near the southeast limb close to 80ºE, 63ºS. This area will be in shadow as the Moon has just passed full, but easy to find just beyond the terminator south of Janssen.
Visual observations and video monitoring may be rewarded with a bright flash or (possibly) a cloud of ejecta that rises into sunlight as the large spacecraft rams into the surface at 6000 km/hr. However it is impossible to predict accurately what will be seen, so perhaps on Thursday scientists and enthusiasts can show the world what an impact looks like.

When is the correct time when kaguya would impact Moon ?
Though predicted location and time is given the actual impact may differ. Japanese scientists will use orbital tracking to refine the place and time by issuing an update at 01:00 UT on June 10. There is also a possibility that Kaguya might impact 1 or 2 orbits (2 or 4 hours) earlier - it is very close to the surface, and both unexpected topographic highs and gravity anomalies may hasten its demise. Observers in Hawaii should definitely check the 01:00 update to see if they should observe, and lucky imagers in Australia, New Zealand, and from Japan to India should check for any changes. If you observe or image any effects of the impact immediately let me know and there will be a special LPOD to announce your observations. I wish you all clear skies!

Since when this Space Craft is near Moon? Why was it sent to moon in first place ?
Kaguya has been in lunar orbit since Oct. 2007; it has searched dark craters for evidence of frozen water, mapped the moon's gravitational field.

Were there any similar impacts before?
Smart-1, impacted a dark part of the Moon on September 3, 2006. The impact of Smart-1 may have been successfully detected only by a 3.6 meter professional telescope operating in the infrared. According to some experts prospects of observing the Kaguya impact with amateur class telescopes are unclear.

Artist Image of a Meteorite Impact on Moon Surface : 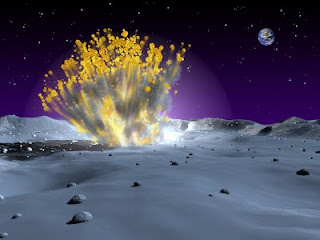 If you want to know more about this mission you can continue to read :

SELENE (Ancient Greek: Σελήνη, moon), better known in Japan by its nickname Kaguya , is the second Japanese lunar orbiter spacecraft. Produced by the Institute of Space and Astronautical Science and NASDA (both organizations that are now part of the Japan Aerospace Exploration Agency, or JAXA), the spacecraft was launched September 14, 2007.

What behind the Name ?
The name stands for Selenological and Engineering Explorer; Selene was a lunar deity in Greek mythology. The orbiter's nickname, Kaguya, which was selected by the general public, derives from the name of a lunar princess in the ancient Japanese folktale The Tale of the Bamboo Cutter. After the successful release of its sub-satellites Rstar and Vstar, they were named Okina and Ouna, also from folklore.


SELENE comes as part of a renewed interest in lunar exploration, being "the largest lunar mission since the Apollo program", and following up on Japan's first lunar probe, Hagoromo, launched in 1990.

China launched its Chang'e 1 lunar explorer on October 24, 2007, followed by India's 22 October 2008 launch of Chandrayaan-1, the United States is also planning to launch its Lunar Reconnaissance Orbiter in June 2009. The United States, European countries (ESA), Russia, Japan, India and China are planning future manned lunar exploration missions or Lunar outpost construction on the moon between 2018 and 2025.

What are the Mission objectives of this mission ?

The main scientific objectives of the mission are:

The SELENE mission was originally scheduled to launch in 2003, but rocket failures on another mission and technical difficulties delayed the launch until 2007. Launch was planned for August 16, 2007, but was postponed due to the discovery that some electronic components were installed incorrectly.

What are Major results of Kaguya ?

* Lunar global topography map which improves previous one.[22]
* Detailed gravity map of the far side of the Moon.[23]
* First optical observation of the internal of Shackleton crater.[24]