Brief about Cassini's "Scientist for a Day”: is an opportunity for students in grades 5- 7 and 8-10 to learn about Saturn and the Cassini - Huygens mission while earning a opportunity to be “NASA’S Cassini Scientist For a Day” and interact with Mission scientists of NASA.

It may be known that in the year 2007 society has been appointed as National Point of Contact for organizing NASA’S “Cassini Scientist for A Day” Contest by CASSINI PEOPLE OUTREACH DIVISION, JPL, NASA. Further N. Sri Raghundnan Kumar, was National Coordinator for this activity 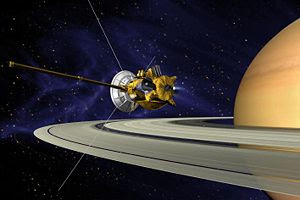 It was launched on October 15, 1997 and entered into orbit around Saturn on July 1, 2004. On December 25, 2004 the Huygens probe separated from the orbiter at approximately 02:00 UTC, as confirmed by the Jet Propulsion Laboratory. It reached Saturn's moon Titan on January 14, 2005, where it made an atmospheric descent to the surface and relayed scientific information. It is the first spacecraft to orbit Saturn and the fourth to visit Saturn.

Do you think i can really do it ?
Students equipped with knowledge on Planet Saturn, Cassini Mission of NASA can very much stand prepared to participate and win.

How do i prepare ?
i. Using books in school library or internet or click here
or
ii. through workshop
or
iii.School in Session (through interactive C.D.)

Note: Few workshops/School in Session would be conducted by organizing committee at various places in India.

Ok, What exactly i should do ?
After due preparation we expect you to write a 500-word essay explaining which of three possible imaging targets(provided by NASA) you think would yield the best scientific results imagining yourself as a scientist on the mission.

What will i get ?
You can win an opportunity to ask questions and get replies from scientists of NASA.