Mars Opposition on 30th Jan,2010:
On 30th January, 2010 Planet Mars would be directly opposite to Sun from our viewpoint on Earth. At which point Mars and the sun are on directly opposite sides of Earth. This Phenomenon is known as Mars Opposition. Because of this Planet mars will be visible all through the night i.e. Mars rises in the east just as the sun sets in the west. Then, after climbing up in the sky at midnight, Mars sets in the west just as the sun rises in the east. 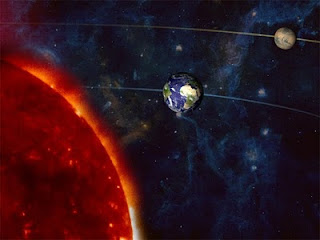 Presently Planet Mars is shining brightly only next to brightest star Sirius and Moon. Mars would continue to be this bright till end of March. While people can continue to spot it until beginning of year 2011 placed at different directions at start of evening every month with decreasing brightness, size as the planet finally gets away from our view. General public can Join us by typing SKYNEWS and send to 56070 for knowing the position of Planet Mars every month along best time, direction to spot, joining observation sessions at various locations.

A small Note before we proceed further:
Like all the planets in our solar system, Earth and Mars orbit the sun. However Earth being closer to the sun, races along its orbit more quickly than Mars, Jupiter etc..Earth makes two trips around the sun in about the same amount of time that Mars takes to make one trip. Mostly the two planets are on opposite sides of the sun, very far apart, and other times, Earth catches up with its neighbor and passes relatively close to it.

How to Spot with Naked Eye: General Public can spot the Mars with naked eye after sunset. One hour after Sun set looking towards the sky opposite to sunset, in the evening one can spot Planet mars between East and North East direction. Whereas at midnight one can see it above his head while in the morning it can be spotted in West and North West Direction. On 30th Jan Mars can be found just towards left of Moon in the evening and towards right of moon on 31st Morning.

How does it look Naked eye - Telescope? Mars would appear as warm yellow gold with a hint of rouge red star like object for naked eye. However if one can see through telescope one can appreciate ice caps in the Northern tip of Mars.

Then here is another news of Moon.

Here is the table of Perigee and Apogee : 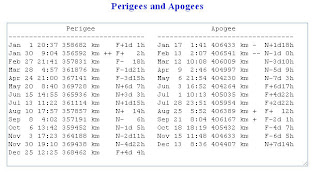 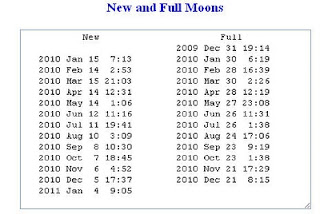 Effort by Society: Planetary Society, India in order to create awareness about Planet Mars is launching “Mars Watch Campaign 2010”. As part of this campaign sky observations beginning second week of Feb will be organized in Hyderabad, Vijayawada, Visakhapatnam, Tirupathi and across the state depending on number of people interested to join.