Away from city lights on 12th/13th August, 2010 people can witness annual spectacle of Perseids Meteor Shower from pollution free dark and clear skies. This shower occurs annually between 23rd July to 24th August due to debris of Comet 109P/Swift-Tuttle entering earth’s atmosphere.

How many Meteors are expected to be seen ? What does previous year records speak about this ?
According International Meteorological Organization (IMO) on the night of 12th\13th August, 2010 people can witness Perseids Meteor Shower with a maximum "normal" peak of 100 meteors per hour (between August 12, 23h30m UT to August 13, 02h00m UT). In the last two decades Perseids surprised observers with 150 to 400+ meteors/hour due to the Earth passing through regions of higher density in the dust stream (e.g., ZHR ~200 last year).

Where to Look – North East Direction- No Telescopes Required - What to expect: People can witness this celestial spectacle till 24th August, 2010. New Moon on August 10 creates perfect conditions to observe the shower. Though meteor shower is at peak on 12th/13th August. This Shower is actively visible up to 24th August, 2010. 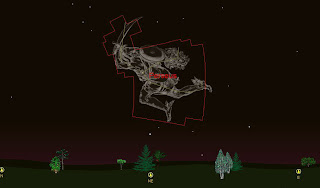 All one has to do is to look towards North East Direction to observe Constellation (pattern of stars) called Perseus.

Do We need telescopes to see this celeastial event ?
Telescopes/binoculars are not required. One can see bright streaks of light zipping across the sky and it would seem as if they are emanating from Perseus Constellation which contains a point in the sky called "the Perseids radiant”.

What exactly is a Meteor shower ?
A meteor is a shooting star (layman’s Language), space dust about the size of a grain of sand. The dust hits the earth’s atmosphere and burns up in a blaze of light. This meteor shower gets the name "Perseids" because it appears to radiate from the constellation (pattern of Stars) called Perseus. This meteor shower occurs annually starting Mid of July to Mid of August.

Where does space dust come from?
Comets and asteroids pass through our solar system. During such pass comets leave dust behind them. When earth crosses through these dust clouds we see a meteor shower. When a speck of this dust hits Earth's atmosphere traveling at greater speed it disintegrates in a bright flash of light—a meteor!

What is the Parent body causing Perseids Meteor Showers ?
Perseids Meteor Showers have their origin from debris left by the comet 109P/Swift Tuttle , which orbits the sun once every 133 years . Simulations by Jeremie Vaubaillon and Mikhail Maslov indicate that we may again encounter 'dust trails' this year, left behind when the parent comet passed the Sun in the years 441, 1479 and 1862.

Why Perseids was known as "Tears of St.Lawrence" or “The Night Of St. Lawrence's Tears"?
The event of Perseids Meteor Showers is also known as "The Tears of St. Lawrence." Over 1700 years ago on August 10th 258 a.d. a young Christian deacon of Rome was martyred by the Emperor Valerian by being roasted alive on a gridiron. And that night as his mourners carried his body away dozens of streaks of light fell from the sky, which prompted his followers to believe that even the heavens were weeping for their dear friend. And every year since almost to the date the skies weep again on what many call the night of St. Lawrence's Tears.