UARS Latest Update (as at 5 pm. 24 Sept) : UARS fell back to Earth between 8.53 a.m to 10.39 a.m. Indian Standard Time The Joint Space Operations Center at Vandenberg Air Force Base in California said the satellite penetrated the atmosphere over the Pacific Ocean. The precise re-entry time and location are not yet known with certainty. www.ournewplanets.com


As per the latest update available (at 9.30 a.m. when this post was written):
The UARS will fall to earth between  is 8.40 a.m to 12.40 noon. Presently (as per 4 hours ago data)  the satellite is still orbiting earth at 142.9 km x 147.9 km. And is taking 84.71 minutes to complete one revolution of earth. Scientists now say just few more orbits are left for this satellite after which it will enter atmosphere. Earlier in the night scientists reported that the UARS was delayed due to tumbling...Importantly activity of Sun is not to speed  up.


This picture shows the possible places where UARS may fall and also the path of the satellite.It evident that the UARS travelling on skies of Americas will fall in ocean.. 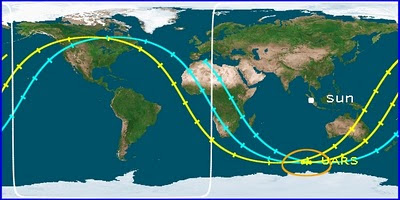 Here is the NOTICE FOR PILOTS : Fedral Aviation Administration (FDC 1/2720) which says :
SPECIAL NOTICE .. EFFECTIVE IMMEDIATELY UNTIL
1109252359 UTC. AIRCRAFT ARE ADVISED THAT A POTENTIAL HAZARD MAY
OCCUR DUE TO REENTRY OF SATELLITE UARS INTO THE EARTH'S ATMOSPHERE.
FAA IS WORKING WITH THE DEPARTMENT OF DEFENSE AND NASA TO ENSURE THE
MOST CURRENT RE-ENTRY INFORMATION IS PROVIDED TO OPERATORS AS QUICKLY
AS POSSIBLE.  FURTHER NOTAMS WILL BE ISSUED IF SPECIFIC INFORMATION
BECOMES AVAILABLE INDICATING A UNITED STATES AIRSPACE IMPACT. IN THE
INTEREST OF FLIGHT SAFETY, IT IS CRITICAL THAT ALL PILOTS/FLIGHT CREW
MEMBERS REPORT ANY OBSERVED FALLING SPACE DEBRIS TO THE APPROPRIATE
ATC FACILITY AND INCLUDE POSITION, ALTITUDE, TIME, AND DIRECTION OF
DEBRIS OBSERVED. THE DOMESTIC EVENTS NETWORK /DEN/ TELEPHONE
202-493-5107, IS THE FAA COORDINATION FACILITY. WIE UNTIL UFN. CREATED: 23 SEP
18:33 2011

Planetary Society India  concern is  how much prepared are flights starting from India ? Are we prepared?  Is anybody working on this object ? What about the so called organisations in india which claim promotion of Space Sciences ? What is there role ?

Here is the simulation of the UARS published 2 days ago.