Today is great day in the History of India.  As today 14th Nov Marks landing of Indian Flag on to surface of Moon while importantly unraveling new truth.Planetary Society India celebrates the 6th Anniversary of this historic mission & Event with hope that the success story of Chandrayaan reaches every school/college inspiring future scientists of the country.

Chandrayaan-1  was India's first unmanned lunar probe. It was launched by the Indian Space Research Organisation in October 2008, and operated until August 2009. Totally  eleven scientific instruments (payloads) were on board  of Chandrayaan-1. In which Moon Impact Probe (MIP) was one with Indian flag embossed on its sides. 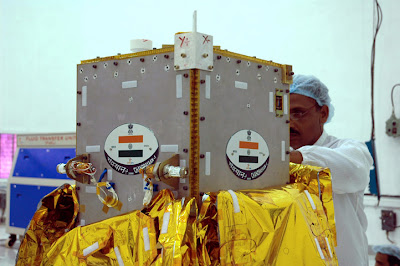 Indian Flag on Moon
On 14 November 2008, the Moon Impact Probe separated from the Chandrayaan orbiter at 20:06 and struck the south pole in a controlled manner, making India the fourth country to place its flag on the Moon. The probe impacted near the crater Shackleton at 20:31 ejecting underground soil that could be analysed for the presence of lunar water ice.

i. Atal Bihari Vajpayee – 15th August 2003 Speech :
Former prime minister Atal Bihari Vajpayee announced the project on course in his Independence Day speech on 15 August 2003. The mission was a major boost to India's space program, as India researched and developed its own technology in order to explore the Moon. The vehicle was successfully inserted into lunar orbit on 8 November 2008 which itself historic. As sources say other nations failed many times before they could make it around or land on moon later.

ii. Former President Dr.A.P.J. Abdul Kalam  & MIP :
The probe which now called Moon Impact Probe (MIP) was a product of former President Abdul Kalam's vision . It was he who felt that since the Chandrayaan orbiter was already going so near to the moon, the mission would have more scientific relevance if the probe was included. Hence had MIP part of Chandrayaan I .

The MIP separated from Chandrayaan at 100 km from lunar surface and began its nosedive at 14:36 UTC (20:06 IST). going into free fall for thirty minutes. As it fell, it kept sending information back to the mother satellite which, in turn, beamed the information back to Earth.

Preparation for Chandrayaan II: The altimeter then also began recording measurements to prepare for a rover to land on the lunar surface during a second Moon mission – planned for 2016-17.

Truth unraveled – Water on Moon:
Following the successful deployment of the MIP, the other scientific instruments were turned on, starting the next phase of the mission.

After scientific analyses of  Data received from the MIP, the Indian Space Research Organisation (ISRO) confirmed the presence of water in the lunar soil and published the finding in a press conference addressed by its then Chairman G. Madhavan Nair.

Chandrayaan-I finds water on the Moon