What is shockingly interesting is that  this football ground Sized space rock was discovered on 23 April , 2014. That means Humans didnt have any knowledge about existence of this object before that date. Now the media as nicknamed as BEAST 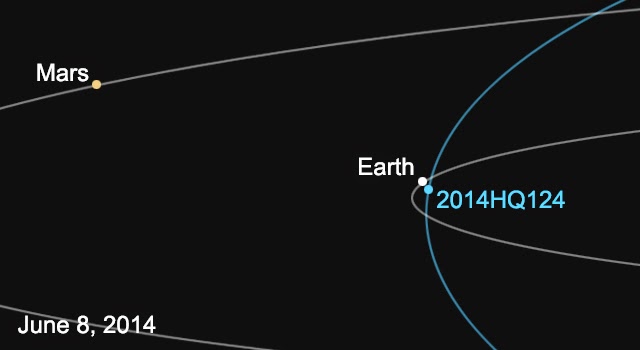 Distance it will miss earth ?
The  newfound asteroid will safely pass Earth on June 8 from a distance of about 777,000 miles (1.25 million kilometers), more than three times farther away than our moon.

Designated 2014 HQ124, the asteroid was discovered April 23, 2014, by NASA's NEOWISE mission, a space telescope adapted for scouting the skies for asteroids and comets. The telescope sees infrared light, which allows it to pick up the infrared glow of asteroids and obtain better estimates of their true sizes. '

Are there any chances of it hitting Earth ?
"There is zero chance of an impact," said Don Yeomans, manager of NASA's Near-Earth Object Program Office at NASA's Jet Propulsion Laboratory in Pasadena, California. "In fact, it's fairly common for asteroids to pass near Earth. You'd expect an object about the size of 2014 HQ124 to pass this close every few years."

How Scientists are sure about its not hitting Earth ?

More than one hundred follow-up observations from NASA-funded, ground-based telescopes and amateur astronomers were used to pin down the orbit of the asteroid out to the year 2200, during which time it poses no risk to Earth. Its trajectory will continue to be recalculated past that time frame as additional observations are received.

Yeomans said that 2014 HQ124 is a good target for radar observations using NASA's Deep Space Network antenna at Goldstone, California, and the Arecibo Observatory in Puerto Rico, shortly after the closest approach on June 8. Radar measurements of asteroid distances and velocities often enable computation of asteroid orbits much further into the future than otherwise known.

2014 HQ124 is designated a "potentially hazardous asteroid," or PHA, which refers to those asteroids 460 feet (140 meters) in size or larger that pass within 4.6 million miles (7.4 million kilometers) of Earth's orbit around the sun. There are currently 1,484 known PHAs, but none pose a significant near-term risk of impacting Earth.

"Because NEOWISE is a space telescope observing the dawn and twilight sky at infrared wavelengths, it is particularly good at finding large NEOs that make relatively close passes to Earth," said Amy Mainzer, the principal investigator of NEOWISE at JPL. "Using infrared light, we can estimate the object's size, and we can tell that it reflects a fair amount of light. That means it's most likely a stony object."