Year 2015 like any other years has various celestial events lined up for every one of us to be enthralled. On 6th February, 2015 one of the exciting celestial events of the year “Jupiter at Opposition with Sun” will occur. Because of which Planet Jupiter (Bruhaspati/Guru in Hindi/Telugu) will be closest to Earth now than in any part of 2015. And because Jupiter is closest it will be brightest and appear biggest.


It’s known fact all Planets (including Earth, Jupiter etc) orbit Sun. During the course of Journey around Sun the positions of Earth & Jupiter is that they will have face off which is known as Opposition.


In other words Due to this phenomenon of opposition Sun- Earth- Jupiter would be opposite to each other from our perspective on earth. And in a line if one can see them from above with Sun &Jupiter on either side of earth. Because of this an observer can easily locate Jupiter looking opposite direction to Sun Set in the evening. Similarly in the morning has to look opposite direction of Sunrise to locate Jupiter. In other words Due to phenomena of Opposition as the Sun sets in west, Jupiter rises (east) in the evening. Whereas as Sun rises in the Morning, Jupiter sets in west.

Brightest - Similar Brightness – For a Month: because of its closeness to earth as of now Planet Jupiter would appear big through telescope and very bright shining at -2.6 Magnitude up to 23rd Feb 2015


DIRECTIONS TO SPOT – JUPITER –  WITH  SIMILAR  BRIGHTNESS -  UNTIL – till  23rd Feb 2015  – TIMINGS : Evening: After an Half Hour after Sunset if one can look towards East direction quite opposite to direction of sunset one would see Jupiter rising. Being visible all through the night, at Midnight one can facing South find it high above head. Morning Walkers: 1 hour before Sunrise towards West, quite opposite Direction to Sunrise 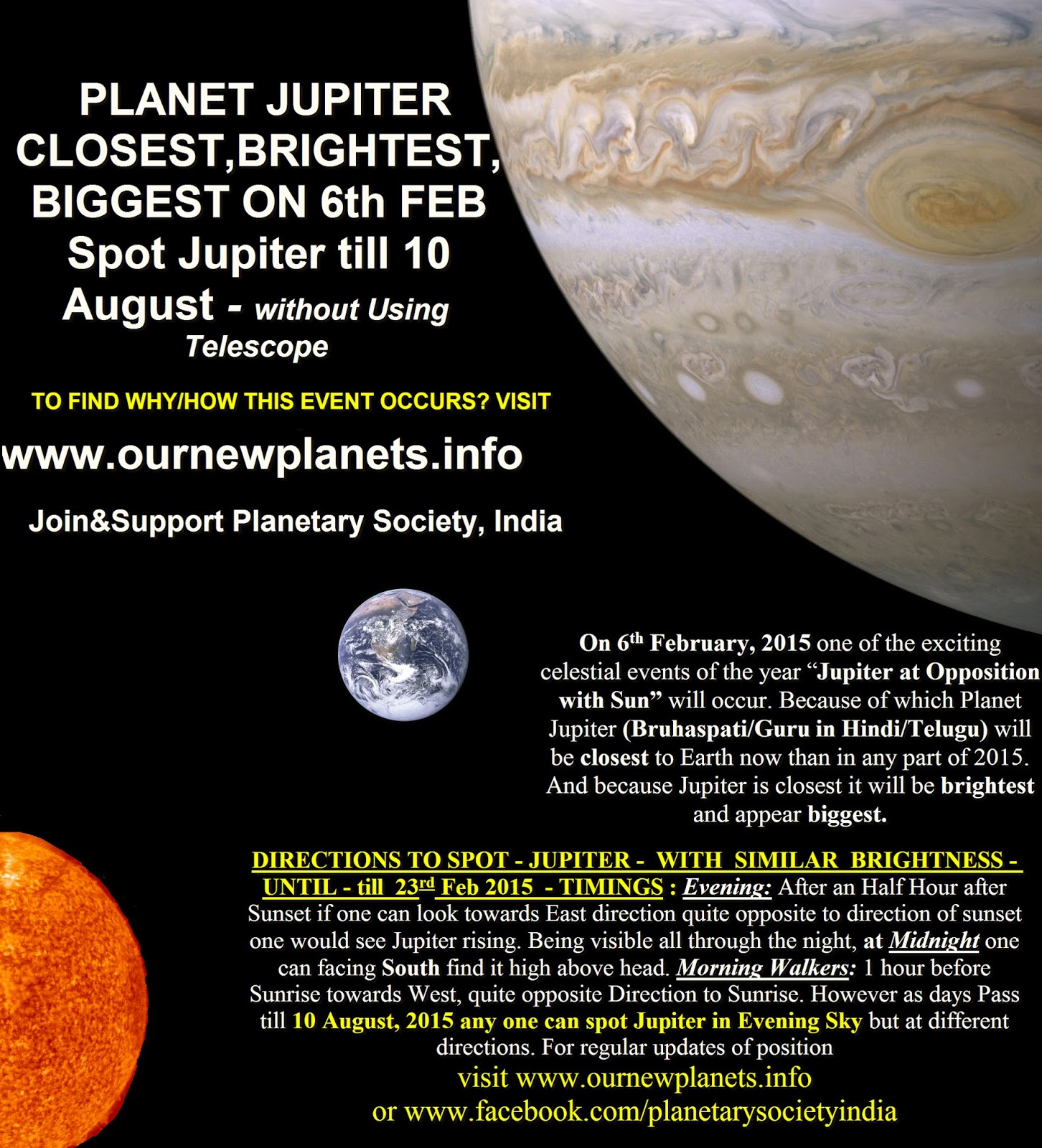 Venus in Sky – Celestial Meeting of Jupiter with Venus 4th August 2015: Planet Venus which is visible in Evening these days can be spotted in West Direction after Sunset till August 2015. So at 6.45 pm one can see Venus in West & Jupiter in East. Importantly on 4th August both Venus and Jupiter will appear near each other due to Conjunction. i.e. Anyone observing both Jupiter& Venus once in a week till August can appreciate journey of Jupiter moving close to Venus for a celestial meeting in Earth Sky

Further Schools/NGO's are invited to write to us for organising/hosting sky observation through telescopes. click here