Last Eclipse for year 2015 will occur on 28th September, 2015. This eclipse is a Total Lunar Eclipse. The Eclipse will be visible in the region covering the Western Asia, Africa, Europe, the Americas excluding the western half of Alaska and the Arctic region.

SKY AND TELESCOPE Click Here to Open in Seperate page


From University of Arizona

From the Mt. Lemmon SkyCenter

SLOOH  Click Here
May ask you to register free before you can see.


Beginning part of Umbral Phase: The places from where the beginning of the umbral phase is visible at the time of moonset are Afghanistan, Pakistan and some parts of Kazakhstan , the western part of Russia and extreme western part of Gujarat and Rajasthan in India.

Visible in Extreme Western parts of Gujarat & Rajasthan – like places around Jaisalmer – for few moments (Beginning of Eclipse): In Jaisalmer Moon Sets late at 6.37a.m. and Sun Rises late at 6.38 a.m..  Both the setting time& rising time of Moon and Sun respectively give few moments’ opportunity to obverse beginning of umbral phase of Eclipse in around places like Jaisalmer in other words extreme western part of Gujarat and Rajasthan.

Why so much Importance to this last Eclipse: The Internet & Media across world is Buzz with this eclipse because both Super Moon and Lunar Eclipse are occurring simultaneously.
The last time simultaneous occurrence of supermoon with lunar eclipse combination occurred in 1982 and the next won’t happen until 2033.

What is Blood Moon ? What is Tetrad?
In astronomy, a tetrad is a set of four total lunar eclipses within two years. The first three eclipses of the tetrad took place on April 15, 2014, October 8, 2014 and on April 4, 2015. September 28 supermoon will present the final total lunar eclipse of a lunar tetrad.

Notice something interesting about the dates? Each of the eclipses in the tetrad occurs about 6 months apart and have 5 full Moons between them!

In recent years, the term Blood Moon has become popular when referring to the total lunar eclipses of the 2014-2015 lunar tetrads.

What is reason for Reddish Color or Blood Colored Moon ?
Astronomers do not use Blood Moon as a scientific term. However, it is possible that the term came to describe total lunar eclipses because of the reddish color the eclipsed Moon takes on during totality.

When the Earth eclipses a full Moon, the direct sunlight is blocked, but the sun's rays still light up the moon. This light, however, has travelled through the Earth's atmosphere first, and sometimes causes the totally eclipsed Moon to look red or brownish. This happens because of Rayleigh scattering, the same mechanism that causes colorful sunrises and sunsets.

Why 28 Sept, 2015 – Moon is called “Supermoon” : Orbit of the moon is not a perfect circle, the moon is sometimes closer to the Earth than at other times during its orbit. When the moon is farthest away it’s known as apogee, and when it’s closest it’s known as perigee. If one see’s the Perigee/Apogee Data for year . On 28 Sept 2015 we’re going to have a closest perigee full moon. In recent times such Closest Perigee Moon as been popularized as Supermoon.

So Moon on 28 Sept is 49,600 km closer to Earth than at apogee. This looming proximity makes the moon appear 14 percent larger and 30 percent brighter in the sky than an apogee full moon which occurred on 5 March 2015. However there’s no physical difference in the moon. It just appears slightly bigger in the sky. 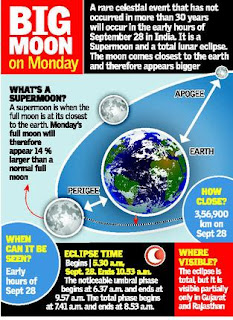 THE HINDU Dt.27 Sept 2015 Today, the moon’s no laughing matter Click here “The tides would be much higher than normal during lunar eclipse. Further, there is a low pressure in the Bay of Bengal and it is likely to intensify further during the next three to four days. This could result in the waves rising higher,” said Prof. K.V.S.R. Prasad of the Department of Meteorology and Oceanography of Andhra University.

Some of our articles in Newspapers :
Bloody supermoon will be 'eclipsed' Times of India http://timesofindia.indiatimes.com/home/science/Bloody-supermoon-will-be-eclipsed/articleshow/49113460.cms