A Total Solar Eclipse will occur on 9th March, 2016. This eclipse in India is visible partially in major parts of the country except some parts of North West and western parts of India.  This is first Solar Eclipse of the Year and only one visible until year 2019 Dec 26th from India.

How much of Sun Disk – Covered by Moon - Percentage of Obscuration- India (8% to 49%): No doubt some parts of Indonesia enjoy 100% of Sun disk covered by Moon. However situation in India to observe this eclipse is not bad either. In India obscuration of the Sun by the Moon ranges from 8.2% to 49 %  depending on location of Observer from Sunrise to 6.49 a.m.

Solar Filters - Hyd or Vizag - Observation: as the next Solar Eclipse visible from India is in 26 Dec 2019 imited number of Special Imported German filters Googles priced at Rs.100 each are available at Khadi Gram Udyog Bhandar, Opp: Eseva Near Koti Maternity Hospital Sultan Bazaar, Koti  Mr.Viraat Manager can be contacted on 9848324305. Further Mr.Simhadri for Visakhapatnam on Ph.8978328127 .

Note: Solar eclipse should not be seen directly with naked eye. One can use proper filter like aluminized Mylar, black polymer, welding glass of shade number 14 or by making projection of Sun’s image on a white board/Mirror.

Observation of Eclipse is being organised on 9th March 2016  from 6 a.m. to 7a.m. at Tank Bund, Secunderabad, Telangana and Ramakrishna Beach, Vishakapatnam A.P.  Public can RVPSP/Register at www.ournewplanets.info. Further Spotting of Jupiter which is closest without telescope also would be conducted at both Venues 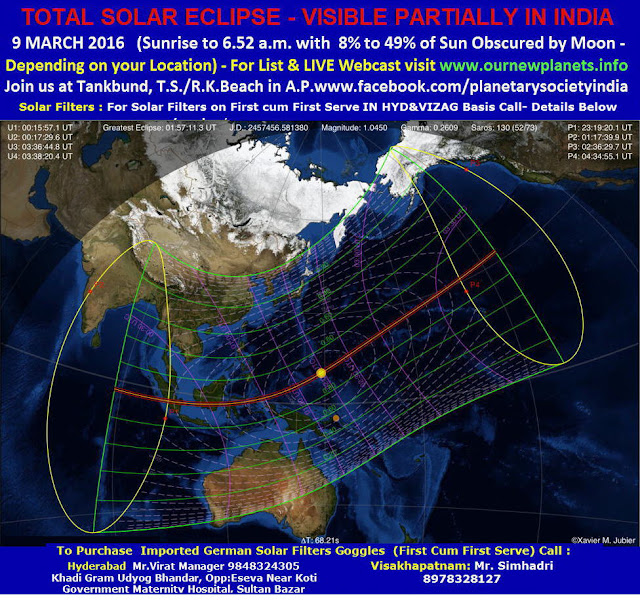