ANNULAR SOLAR ECLIPSE ON 7th Feb, 2008 - NOT VISIBLE IN INDIA

One of the First eclipses of year “Annular Solar Eclipse” will occur on 7th February, 2008. However this Eclipse is not visible in India.

This eclipse will be visible only in the region covering most of Antarctica, New Zealand, The south-eastern parts of Australia, Vanuatu, Fiji and Western Samoa.


Brief About Solar Eclipse: A solar eclipse occurs when the Moon passes between Earth and the Sun, thereby totally or partially obscuring Earth's view of the Sun. ie. all solar eclipses involve the Moon passing between the Earth and the Sun, and casting a shadow on the Earth. However, the type of eclipse which can be seen from a given location depends on whether the Moon passes directly, or only partly, between the Earth and Sun; but also on where on Earth you stand to observe it, and on a number of other factors. 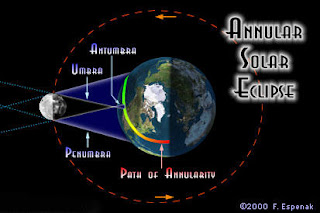 Types of Eclipses:
A total solar eclipse occurs when the Sun is completely obscured by the Moon. The intensely bright disk of the Sun is replaced by the dark outline of the Moon, and the much fainter corona is visible.

An annular solar eclipse occurs when the Sun and Moon are exactly in line, but the apparent size of the Moon is smaller than that of the Sun. Hence the Sun appears as a very bright ring, or annulus, surrounding the outline of the Moon.

A partial solar eclipse occurs when the Sun and Moon are not exactly in line, and the Moon only partially obscures the Sun. This phenomenon can usually be seen from a large part of the Earth outside of the track of an annular or total eclipse.