Brief about Venus - Planet not a Star: Venus, named after the Roman goddess of love and beauty, is the second planet from sun in our solar system. Even today Venus is often misunderstood as a “Star” because of its “star like” appearance as seen through naked eye, whereas it is a planet.


Orbit of Venus being near to sun, it rises and sets with the Sun each day during its course of its revolution around sun. One would see it in evening (towards west) or morning (towards east) at different parts of the year. Unaware of this fact ancient civilizations believed it as two different objects. On 27th Feb, 2009 Planet Venus is in conjunction with moon at 11.57 UTC.

On 27th and 28th February Planet Venus can be spotted easily using Crescent Moon. Planet Venus during course it journey around sun and Moon around earth on 27th and 28th Feb. are in such a geometrical position called conjunction that they appear to be near each other giving people an excellent opportunity to locate them easily. 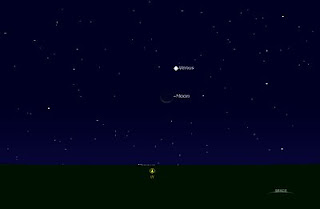 Directions – Time - Using Crescent Moon – No telescope needed: One has to look towards west direction to find Venus after sunset, one would observe “bright star like object” which is planet Venus. People can observe Venus without any telescope. However to appreciate finer details of the object one requires telescope or binocular. 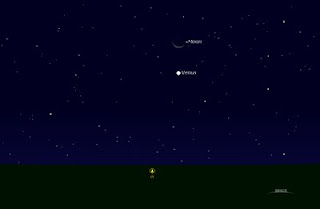 Position on 27th and 28th Feb : On 27th February, 2009 Venus can be spotted above the crescent moon. On 28th February, 2009 which is “National Science Day” people can spot Venus below moon.

As seen from earth though Moon and Venus appear to be near each other. Whereas in reality they are separated by millions of kilometers of distance.

Other Details Evening/Morning object: Uptill end of second week of March 09 Venus can be spotted in evening sky. Whereas it can be spotted only in the morning sky, towards east direction beginning second week just before sunrise of April this year.

Science Kit containing Sky Maps to put on the notice board of the school. Can be downloaded click here. Animations may be added tomorrow.