Planetary Society, India in association Andhra Pradesh State Council of Science and Technology (APCOST) and Dr.K.V.Rao Scientific Society as part of Annular Solar Campaign 2010 with a motive to create awareness among school students has undertaken state wide activities with the help of 23 District Coordinators and 5 Regional coordinators of the APCOST. Activities like Space Simulator (Students created simulations of solar eclipse as seen from 50 different countries), Media Discussions on the subject and others are already planned. Importantly at State Level Press conference Compact Disk, Poster, Presentation of Simulated Animations of Eclipse with experts like Prof. G. Yellaiah, Dept of Astronomy, O.U., N. Sri Raghunandan Kumar, General Secretary were conducted.


Brief about Solar Eclipse: A solar eclipse occurs when the Moon passes between the Sun and the Earth such a way that the Sun is wholly or partially obscured. This can only happen during a new moon, when the Sun and Moon are in conjunction as seen from the Earth.

Annular Solar Eclipse: An annular eclipse occurs when the Sun and Moon are exactly in line, but the apparent size of the Moon is smaller than that of the Sun. Hence the Sun appears as a very bright ring, or annulus, surrounding the outline of the Moon.

Antumbra: This is that part of Moon’s shadow from which Sun appears larger than the Moon which is seen in complete silhouette. An annular eclipse is seen by an observer when he is located on path of antumbra 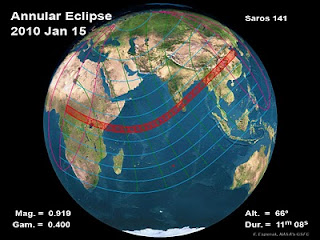 Importantly as part of this campaign “Student Space Simulators” project is being carried out at Hyderabad involving school students from three regions of the state.

Annular Solar Eclipse will occur on 15th January, 2010. This eclipse is visible partially in major parts of the country. This is first Solar Eclipse of the Year and best until year 2019 Dec 26th. As the next solar eclipse in 2011 on Jan 4 is visible to people in Northern parts of the country and few places in Gujarat. Whereas the solar eclipse in 2016 though visible in India begins and lasts only for few minutes close to horizon in early hours of March 9


Path of the Eclipse : The annular path of the eclipse will pass through the region covering southern tip of Chad, the Central African Republic, the northern Democratic Republic of Congo, Uganda, Kenya, the southern tip of India, northern Sri Lanka, the south-eastern tip of Bangladesh, Myanmer and south-eastern China. After leaving Africa, the path crosses the Indian Ocean where the maximum duration of annularity reaches 11 min 08 s.

It will be seen as annular within a narrow stretch of 333 km width covering across Central Africa, Maldives South Kerala, South Tamil Nadu, North Sri Lanka, Burma and China. Whereas this eclipse would be seen as partial from eastern Africa, south-east Europe, the Middle East, and south-east Asia

Timings of the Eclipse :

World Wide:
Astronomically speaking the phenomena of Eclipse begins (first contact with earth) at 9.35 a.m. and ends at 3.38 p.m (last contact with earth) in the evening. In which the Central Phase of Eclipse begins at 10. 48 a.m. and Ends at 2.25 p.m. Wherein Greatest Eclipse Phase (when the eclipse is maximum occurs) at 12.36 p.m The duration of Annular Phase of Eclipse at maximum phase is 11 minutes and 4 seconds when people would witness sun as bright outline around moon disk like a ring. 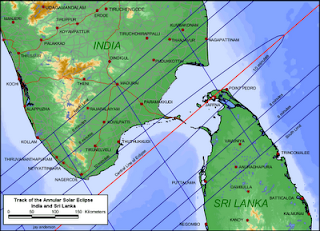 The Percentage of Sun’s Disk at when eclipse is maximum (around 1.32 p.m) is Rajahmundry 83%, Vijayawada at 82%, Kurnool 79%. For Hyderabad its 77 %. Whereas Nellore District in our state is best place to witness this spectacle where covering of Sun’s disc by Moon would be 85%.

Percentage of Visibility – The More one his away from the Annularity Path – Less the Percentage of Sun Disk Coverage – at Maximum Phase : However this event can be seen only partially from major parts of the country. Depending on the location of the observer one can see the sun’s disk being covered from 42 % or less as one gets away from the ant-umbral path of eclipse.

When the eclipse reaches the maximum point. For an observer in Hyderabad would see 77 % of Sun’s disk. Whereas an observer in Ahmadabad can see only 56% or 42 % in case of observer in Jammu who is far away from the path of annularity. Even closely a person observing from Chennai would see only 89 % of sun being covered, whereas one from thanjavur being in antumbral path would enjoy Moon’s entire disk silhouetted against the Sun. Which allows him to see sun as bright ring, or annulus, surrounding the outline of the Moon.

Best Places to be at : Some of the best places through watch this eclipse where path of annularity passes is Karaikal, Madurai, Nagapattinam, Nagercoil, Rameswaram, Sivaganga, Tanjore, Thiruvarur, Tirunelveli, Trivandrum. i.e. is from these places and around people would witness Moon’s entire disk silhouetted against the Sun. Rameshwaram would witness highest duration during maximum phase i.e. 10 min 8 sec followed by Kanyakumari where it will be 9 min 58 seconds.

2016 9th March : The next opportunity to observe solar eclipse which is partial will occur on 9th March 2016 covering major parts of country . However eclipse begins well before sunrise in the morning and lasts upto 6.47 a.m when sun is close to horizon. This is very difficult to appreciate.


26th December, 2019: The best next prominent opportunity covering larger parts of the country of a Solar Eclipse will only happen on 26th December, 2019 which begins late in early morning when sun is sufficiently above horizon and continuing up to noon.
This means people in major parts of India missing the opportunity to observe the eclipse on 15th January, 2010 will not have opportunity to observe the solar eclipse for next 9 years until year 2019. Importantly the duration of annularity which is 11 minutes 8 seconds during this annular eclipse on 15th Jan,2010 will not be exceeded for over 1000 years (3043 Dec 23).

Tips for Observations: Solar eclipse should not be directly with naked eye or things like x ray films etc. As it may cause injury to eye. Hence people should use certified solar filters. Or use indirect projection method i.e. people can take a white paper and make a round hole into it. While facing one’s back toward sun one should hold the paper in such a way that Sun rays pass through the hole and fall onto wall. This way one would see projected image of sun light slowly getting darken as the eclipse progresses and get clear once the eclipse is complete.