Friends  today being 150th Birth Anniversary of Sri Rabindranath Tagore a great  poet, novelist, musician, and playwright and author of "Gitanjali". Here are my impression on few selected words of tagore. 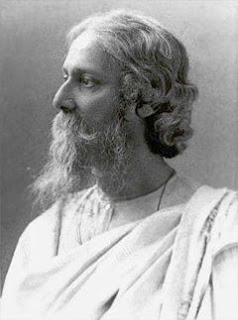 Where the mind is without fear and the head is held high;

Where knowledge is free;

Where the world has not been broken up
into fragments by narrow domestic walls;

Where words come out from the depth of truth;

Where tireless striving stretches its arms towards perfection;

Where the clear stream of reason
has not lost its way into the dreary desert sand of dead habit;

Where the mind is led forward by thee into ever-widening thought and action---
Into that heaven of freedom, my Father, let my country awake.
Above are the words of great Rabindranath. You can see his vision for the future of his country.

"Where the mind is without fear and the head is held high;"
1. Mind Without Fear - Dream of Tagore - Today's World and India's Mind in Fear :
Leave alone fears Terrorism, Corruption, natural calamities etc...today's majority of India wakes up in the non-science spread by few people who are dwelling and raking money on the weakness of human mind, insecurities of modern life.etc... These vested interested people are causing the minds of young and old alike to be in fear. Using the devotion of the people as tool.These fear causers embed themselves like the parasites do in a package of  early morning devotional programmes. May they be inspired by the words above.


"Where knowledge is free;
Where the world has not been broken up
into fragments by narrow domestic walls;"
2. Free Knowledge - Dividing Walls : Today knowledge in india is not free. Highest knowledge is available at highest costs.  Poor can rarely have access to works of great men including Abdul Kalam.  We can see people breaking and creating walls of hatred in the name of language, Region etc...  Forgetting and not solving the issues, which give birth to injustice of  region or language or people.


"Where words come out from the depth of truth;
Where tireless striving stretches its arms towards perfection;"
3. Truth and Perfection : Today when people talk the words do not come from the depth of their hearts. Lost in so called hi-tech materialist life, one feels like people are just pretending for what they are speaking.

Today you can see their is hardly anyone striving hard tirelessly for perfection. We can at many times see,people serving half halfheartedly without any accountability to their own conscience. May be there minds are tuned are in competition to match the demand supply curves of human needs.


"Where the mind is led forward by thee into ever-widening thought and action---
Into that heaven of freedom, my Father, let my country awake.:"
5. Thought and Action : Today mind of people led backward lost in fear of hardship from the above or unknown superficial forces. Even Science is regularly quoted to support these versions of irrational thinking.


--------------------
"Leave this chanting and singing and telling of beads! Whom dost thou worship in this lonely dark corner
of a temple with doors all shut? Open thine eyes and see thy God is not before thee!
He is there where the tiller is tilling the hard ground and where the pathmaker is breaking stones. He is
with them in sun and in shower, and his garment is covered with dust. Put of thy holy mantle and even like
him come down on the dusty soil!
Deliverance? Where is this deliverance to be found? Our master himself has joyfully taken upon him the
bonds of creation; he is bound with us all for ever.
Come out of thy meditations and leave aside thy flowers and incense! What harm is there if thy clothes
become tattered and stained? Meet him and stand by him in toil and in sweat of thy brow."

These are the words from Tagore on what is the real Workship.


True way of Workship : Personally these are the words which liberated me from the realms of pujas/rituals i used to follow before starting Planetary  Society, India. I hope remembering these words would do the same to many others. I read this prose in one of my school/college lessons. Here Rabindranth Tagore reveals the true way to workship lord.

To summarise he professes the idea of "WORK IS WORKSHIP". The burning of Incense sticks, chanting of mantras will not help and are not real offering to the lord.


You may ask Why Planetary Society, India celebrates 150th Birth Anniversary of Rabindranath Tagore ?
India is one of the unique country in the world. With multiple languages, religions, diversity of culture etc.... Unity in Diversity is what is holding the country with so much diversity.At this point works of great men like Tagore are now part of Indian psyche. His works are great inspiration to mankind. His vision for the people, the country and the world are far reaching.

Though we have to come to know about this important anniversary we thought we celebrate with small piece of work in his praise to inspire the future of india and world.

Conclusion : However due to various reasons people have forgotten the message of Tagore. On his 150 Birth anniversary we take this opportunity as a vehicle to promote scientific temper while providing my own impression inspired from the son of this soil.

Note : Do comeback here for brief biography of Tagore, his works and importantly our collection of his books, videos being compiled for your kind perusal.